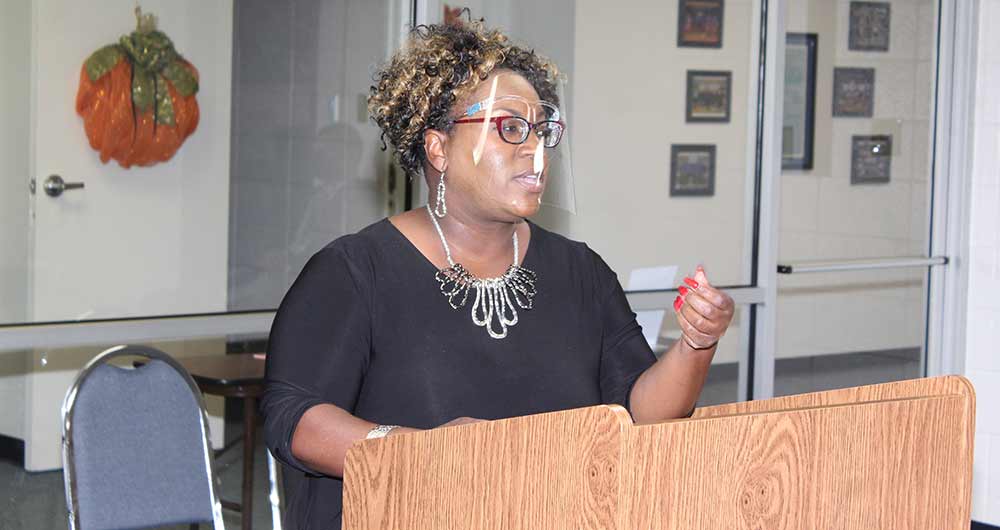 Assistant Superintendent Chanel Veazy, of the Crockett Independent School District, is shown above leading a discussion on an Asynchronous Learning Policy, a new policy with guidelines for making remote learning available to students whose parents want them to receive instruction from their teachers at home via the internet, at a meeting of the district’s board of trustees Monday evening, Sept. 28. (ALTON PORTER|HCC PHOTO)

Because of the existence of the COVID-19 pandemic and the potential for the continued spread of the virus, some students are staying home and learning remotely from their schools.

Some of the remote learners across the state are engaged in the asynchronous method of remote learning, and the members of the Crockett Independent School District Board of Trustees approved an Asynchronous Learning Policy for the district at a school board meeting Monday evening, Sept. 28.

The CISD trustees voted to pass a motion, made by District 3 Trustee Roy E. Johnson and seconded by District 1 Trustee Ansel Bradshaw, approving the policy, following a presentation given by Assistant Superintendent Chanel Veazy and a lengthy discussion by the trustees.

According to the Texas Education Agency (TEA) website, remote            asynchronous instruction is “instruction that does not require having the instructor and student engaged at the same time. In this method, students learn from instruction that is not necessarily being delivered in-person or in real time.

“This type of instruction may include various forms of digital and online learning, such as prerecorded video lessons or game-based learning tasks that students complete on their own, and pre-assigned work and formative assessments made available to students on paper.”

Before Veazy’s presentation, Superintendent John Emerich said, “This is a plan that’s required by the state for us to submit. It does take board approval. Obviously, we’ve been working under it for a while now. We actually sent this to Region 6 (Education Service Center).”

Veazy added, “They (Region 6 staff members) had very, very favorable comments about it. I was excited about that. So, we’re hopeful that TEA will accept the plan as well.”

“Synchronous (another remote learning method) is online, but (in real time) with a teacher while (students) are online. Asynchronous is happening outside of direct teacher contact. So, TEA wanted us to have a formulated plan for how we were going to do that. And that’s what we put together.”

In answer to another question from Garner, asking how well the asynchronous learning students are keeping up with learning material and pass/fail, Veazy said, “The secondary campuses are not faring as well. That’s even with daily contact—daily reaching out.

“They won’t turn in the assignments—some of the same struggles you have when they are face-to-face.

Garner said, like other trustees, he has communicated with stakeholders in other districts in the area and region, “and it’s very typical that asynchronous learners are having a high failure rate, particularly at the secondary level.

“This is not unique to us. It’s actually throughout the whole state, but I have talked personally to some in the area’s districts that are having the same problem. You have a whole family of kids that are not being guided or directed by their parents correctly. You can have multiple students in the same household on various grade levels that are falling further and further behind.”

Emerich added, this is becoming a statewide problem. “One thing that I think that highlights is the importance of in-school learning,” Emerich said. “We’re doing the best we can to try to teach kids in this situation we’re in, but the best place for them to be is in school. We’ve always known that, but this is kind of highlighting it.”

In other business, the trustees voted to pass a motion, offered by Bradshaw and seconded by District 2 Trustee Mo Amjad, approving a resolution naming Emerich and Business Manager Tamra Scroggins as the district’s investment officers.

In another action, the trustees voted to pass a motion, made by Garner, appointing nine community members, two students and two district staff members to the district’s School Health Advisory Council (SHAC).

High school students appointed as members of the council are Chris Burks and Brandon Marrs.

A SHAC is a state-mandated advisory council whose members are appointed by school board members who work together to improve the health of all of a district’s students and families through coordinated school health programs.

The trustees voted to pass a motion, offered by Bradshaw and seconded by Johnson, approving the district’s 2020-2021 school year teacher appraisal calendar.

They voted to pass a motion, made by Johnson and seconded by Bradshaw, approving two amended Nov. 3 school district election items: an amended notice of general election and an amended order of election.

The two candidates who are in a race for a position of the board of directors—the District 2 seat—and whose names will appear on the school district’s election ballot are incumbent Mo Amjad and challenger Stephen Tuggle.

Early voting in the election will be conducted Tuesday, Oct. 13, through Friday, Oct. 30.

After a presentation by Veazy and Junior High School Principal Johnny Gomez, the trustees voted to pass a motion, offered by Johnson and seconded by Amjad, approving a 2020-2021 targeted improvement plan for the district’s junior high school and elementary school.

The trustees voted to pass a motion, made by Garner and seconded by Amjad, approving acceptance of monetary donations of undisclosed amounts from the J.B. & Kathryn Sallas Charitable Foundation to the district’s elementary, junior high and high schools.

“Many in the room knew Mr. and Mrs. Sallas,” said Garner. “You may or may not have been aware that they did not have children of their own, but they were always interested in the community and development of the community. And this is a generous gift…. This foundation continues to give. It’s most appreciated in the amount that’s been given to us.”

And the trustees voted to pass a motion, offered by Johnson and seconded by Bradshaw, approving consent agenda items: minutes of a regular board meeting held Aug. 24, a district bills and budget comparison and a district investment report.