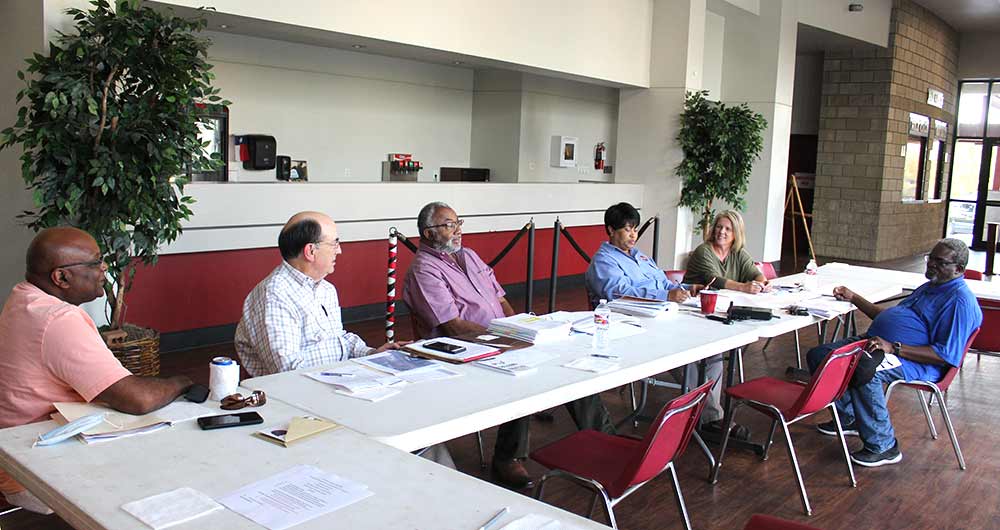 Members of the Crockett Economic & Industrial Development Corporation Board of Directors discussed a tax abatement agreement and incentives they and city and county officials are offering in an effort to help attract a high tech sawmill business to Crockett at a meeting of the CEIDC directors Thursday evening, Oct. 1. (ALTON PORTER|HCC PHOTO)

Crockett economic development officials are hoping to attract a lumber facility to the city that would be used as a regional sawmill and add at least 18 new jobs to the city’s employment roll.

Members of the Crockett Economic & Industrial Development Corporation (CEIDC) Board of Directors, and city and county officials are hoping to land a proposed company, which would be named Lincoln Lumber Crockett, LLC, in the city, and its executives project that it would open for business during the second quarter of next year if all relevant parties approve a proposed contract agreement.

The CEIDC board members met with three representatives of the proposed Lincoln Lumber company Thursday evening, Oct. 1, and approved a tax abatement and incentive agreement that would assist the company financially in establishing and maintaining the business in the 200 block of West Austin Street for several years.

The CEIDC directors voted to pass a motion, made by Board Member Cynthia Neel and seconded by Board Secretary-Treasurer Robert Thompson, approving the agreement, including proposed abatements and a suggestion to recommend it to city and county officials for their approval.

Other CEIDC board members present at the meeting were President Chris von Doenhoff, who presided over the meeting, and Gerald Barkley. Board member Colin Castleberry was absent.

In addition to the CEIDC board members and CEIDC Executive Director James Gentry, who were present at the meeting, Crockett city officials who attended and participated in a lengthy discussion about the tax abatement and incentive agreement and related matters, were City Administrator John Angerstein and City Attorney William R. “Bill” Pemberton.

The proposed parties to the contract agreement are the city of Crockett, Houston County and the proposed Lincoln Lumber company, and the agreement sets out proposed property tax abatements, incentives and performances by all parties.

Following the CEIDC’s approval of the agreement, it must now be approved by city and county officials and Lincoln Lumber executives. A 30-days’ public notice must be given before the city can consider it, Pemberton said.

“We’re ready to start moving forward with efforts to bring about the abatements, both with the city, as well as with the county,” Gentry said, on behalf of CEIDC officials.

Introducing the executives of the proposed Lincoln Lumber company to the meeting attendees, Gentry said, “We, basically, have tried to negotiate with them and work with them and the city in terms of how to bring about the (establishment of the sawmill here) and the opportunity to bring 18 good paying jobs to our community. I want to make sure that everybody is appreciative of the fact that we’re not going to turn down any opportunities for jobs here in the community.

“We want to make our best effort to ensure that they are happy being here and we want them to be part of our community, in terms of being able to grow with our community, as well.”

According to the agreement, the proposed Lincoln Lumber company would invest a minimum of $7.5 million in starting up the business over the first two quarters of 2021.

The current value of real property where the company’s facilities will be set up and existing improvements prior to construction is $318,950, according to Houston County Appraisal District staff members, and the estimated investment value that will qualify for abatement is $10.2 million.

If the agreement is approved by all parties, the abatements will commence Jan. 1, 2022, and terminate Dec. 31, 2026, after five tax periods.

Under the proposed agreement, Lincoln Lumber’s property taxes would be abated 100% by the city and county the first year, 80% the second year, 70% the third year, 60% the fourth year and 50% the fifth year.

Incentives proposed to be provided by the city are waiver of all fees for water, sewer and permits, the proposed agreement states.

Construction of the sawmill would begin the first quarter of 2021 and be completed by the second quarter of next year.

The annual payroll for the 18 employees would be approximately $692,600 according to the agreement.

In other business at the Oct. 1 meeting, the CEIDC board members set their regular meeting date and time to be the second Tuesday each month, beginning at 5:30 p.m.