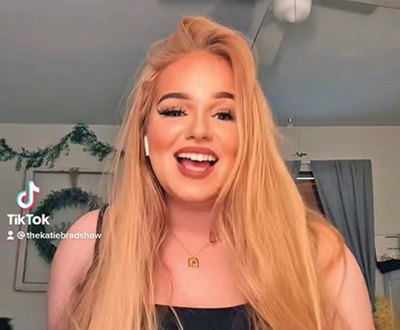 Photo courtesy of Katie BradshawBy Jan White
This email address is being protected from spambots. You need JavaScript enabled to view it.

Type this string into your favorite search engine – Thekatiebradshaw. The top results are likely to be videos with the word “Blackout” in bold letters. And @Thekatiebradshaw, the person responsible, is none other than the daughter of local residents Ansel and Brenda Bradshaw.

Katie Bradshaw, a recent Crockett High School graduate, attends Baylor University, but in her spare time, she enjoys posting video clips on TikTok. For those unfamiliar with TikTok, it’s a social media app that allows people to create and share fifteen-second videos. Many video clips use snippets from songs, speeches, TV, or movie dialogue, called “sounds.” Once a user records and publishes these sounds, they are saved in TikTok and can be reused by other content creators. Lip-synching videos are hugely popular, and one of the quickest ways to become “viral” or “trend” is to come up with a sound that others want to copy or try out for themselves.

That’s exactly what Katie did.

This past summer, she saw the musical, In the Heights, and in Katie’s words, “I fell in love with the song, “Blackout.”  The scene that grabbed her attention was a beguiling little argument between two of the main characters, Usnavi and Vanessa. Using audio from that scene, Katie created a fourteen-second TikTok video where she lip-synchs the roles of both Usnavi and Vanessa.

Over the summer, the video gained popularity, eventually reaching over a million views. At the same time, other TikTok creators and influencers began using her sound in their videos. The sound was trending like wildfire.

The actors who played Usnavi (Anthony Ramos) and Vanessa (Melissa Barrera) posted their own videos of the trend. Shortly after that, the musical’s writer, Lin-Manuel Miranda, known for his 2015 Broadway musical hit, Hamilton, also used Katie’s sound to recreate the scene.

To understand the impact here, you must realize that celebrities use social media. A lot. Twitter, Instagram, TikTok… the apps help keep them in the spotlight and connect them with their fans. And these celebrities have thousands, sometimes millions of followers. So, in the world of social media, for Katie’s sound to be used by these artists is a big thing. Big enough that a reporter from Entertainment Weekly contacted Katie about using her story in a year-end article covering the top TikTok trends of 2021.

Right now, Katie is enjoying her “fifteen minutes of fame.” Asked if she thought about pursuing a theatrical career, Katie laughed, clarifying that her studies at Baylor were in pre-law. But she fully intends to continue using her social media platforms to feed her creative side. “I’ve been performing since I was two years old,” she said. “It’s in my blood.”