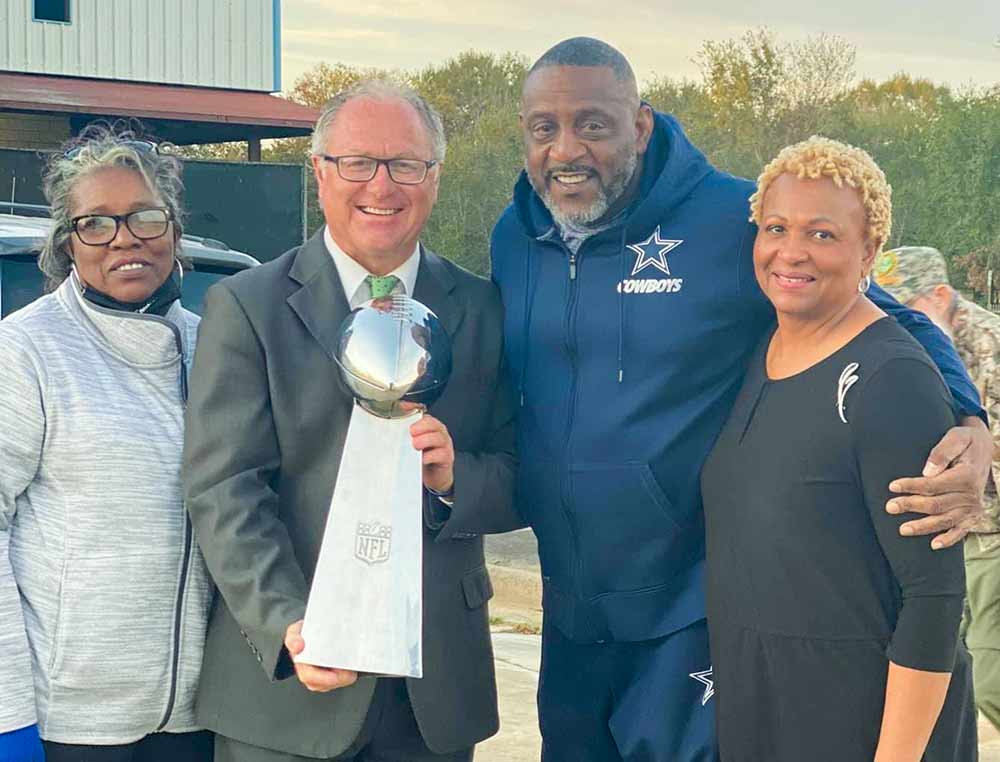 Lockhart previously shared how the turkey giveaway came about. “I had a dream. And, in that dream, God gave me a vision. Being from a small country town, I visualized coming back and doing something to let the people know that God and they have made a difference in my life, and I want to let them know I appreciate it. I just want to encourage you to never stop chasing your dreams until you achieve them. And dream big! Don’t let small minds convince you that you can’t achieve your dream. And, if you ever feel like you want to fall, try to land on your back because if you can look up, you can get up.”

Eugene Lockhart Jr.’s story is an inspiration for those who wish to dream big. A true “local boy makes good” tale, Lockhart became a two-year starting linebacker for the University of Houston during the 1982 and 1983 seasons. In 1983, the Cougars named him tri-captain of the football team, and he was named second-team All-Southwest Conference by UPI and voted the team’s most valuable player.

In 1984, the Dallas Cowboys selected Lockhart in the 6th round of the NFL Draft. He was the first rookie in Cowboys’ history to start as a middle linebacker. Lockhart led the team in tackles in four of his seven years with the Cowboys, where his aggressive plays earned him the nickname “Mean Gene, the Hitting Machine.”

While Lockhart admittedly has suffered some setbacks, they never kept him from pursuing his dream of giving back to the community where he grew up. With the help of family and friends, Lockhart has provided free turkeys, along with other food items, for local pastors to distribute to families who otherwise wouldn’t have much of a Thanksgiving.

This year the event was held in front of the Porth Ag Arena on Friday, November 19. A U-Haul truck containing frozen turkeys was positioned in front of the arena, ready to pass out the poultry.

Jurlinda Lockhart Gentry, Lockhart’s sister and spokesperson for the event, began by thanking attendees for coming. She spoke briefly about Eugene’s vision for the giveaway. Then she introduced Emmitt Horace of New Restoration Ministries Church of God in Christ, who led the crowd in an uplifting version of the hymn “We’ve Come This Far by Faith.”

Following the song, Mayor Ianthia Fisher shared her thoughts. Recalling the words “A place to call home,” Dr. Fisher referred to the city of Crockett as “home” and its residents as “family.” She then expressed her appreciation to Eugene and the Lockhart family for all they’ve done to make this opportunity happen and for taking care of the “Crockett family.”

Mrs. Gentry invited local pastors in attendance to share a few words, afterward acknowledging Pastor Leon Wallace, Ron Forehand of Good Shepherd Fellowship Church, Dr. Jerome and Mrs. Dorothy Washington, Calvin and Cynthia Neel, and Kenny and Pam Rains from First Baptist Church for their support. Mrs. Gentry also expressed her gratitude to Samantha Wiley and Kim with Walmart management for their help providing the turkeys. Previously, the organization purchased turkeys from the Dallas area and cold-shipped them to Crockett. But last year, because of Covid, they partnered with the Walmart Supercenter in Crockett. Mrs. Gentry concluded by expressing appreciation to her husband, James Gentry, Executive Director for the Crockett Economic and Industrial Development Corporation, for his support.

After a prayer of thanks and blessing, pastors lined up their vehicles to receive the turkeys.