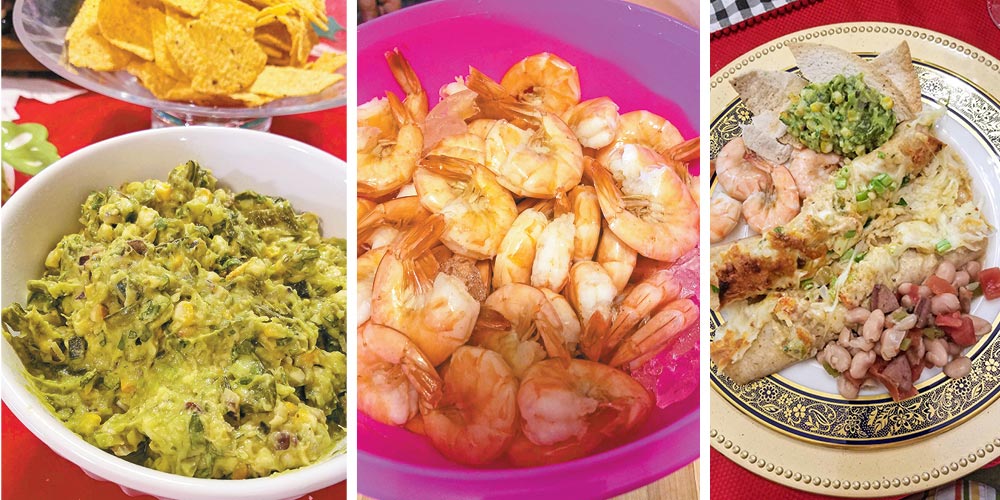 Recent New Year’s Eves have found us comfortably ensconced at home, on the couch in our pajamas, snacking, listening to music, watching some TV, working jigsaw puzzles and playing games.

This most recent one varied just slightly. First, we wore clothes. Secondly, there were no jigsaw puzzles involved. Lifelong friends Julie and Louis invited us over for supper and we all decided to pitch in and make something. We bandied about various menus until we settled on the following. Julie would make her famous crawfish enchiladas. Hubby would make a pot of his famous pinto beans. Louis chose to boil some fresh Gulf shrimp and I decided to round it off with a bowl of roasted poblano and corn guacamole. Julie was even kind enough to make two batches of her crawfish enchiladas, regular ones for them and a set made with low-carb tortillas for us since we’re still trying to eat keto.

No one had mentioned dessert, but at the last minute I decided to whip up the ration cake I’d written about not too long ago. It’s super quick and easy and Daughter had been requesting another one after liking the first one so much. We showed up at Julie and Louis’ house, unloaded everything and discovered Julie had decided to make a dessert too – a tres leches cake topped with fresh sliced strawberries. You know what they say – great minds think alike.

It was a lot of food for five people but we thoroughly enjoyed every bite, even treating ourselves to small(ish) helpings of each of the desserts. Following that delicious spread, we adjourned to the parlor where we exchanged Christmas presents with each other and then played a game. Here’s wishing you all a Happy New Year!

•In a large skillet, melt butter. Add the onions, green chiles, bell peppers, salt, white pepper, cayenne, oregano and the minced garlic. Sauté over medium heat for 10 minutes, stirring often. Stir in the cream and bring the mix to a rapid boil; then reduce the heat and simmer uncovered for 10 minutes, stirring constantly. Add the sour cream; with a metal whisk, beat continuously until the sour cream is dissolved, about 3 minutes. Add cheese and stir until melted. Set the sauce aside.

•In a 4-quart saucepan, melt butter. Add crawfish, green onions and the remaining salt, pepper, 1 teaspoon red pepper and oregano. Sauté over medium heat for about 6 minutes, stirring occasionally. Add the cheese sauce to the crawfish mix and stir well. Simmer until the flavors are well blended, about 6-10 minutes, stirring occasionally. Set aside. In a small skillet, heat the oil to 325 degrees. Holding the tortilla with metal tongs, dip each into the hot oil just long enough to soften, about 1 second on each side; drain on paper towels. Spoon about ⅓ cup of sauce on each tortilla and roll up tortilla; place seam side down in a baking dish. Cover the tortilla from end to end with a generous amount of additional sauce. Then sprinkle it with the remaining cheese.

•Soak beans in a pot of water overnight.
•Add pepper and bring to a boil.
•Add chopped bell peppers and onions.
•Add pinto bean seasoning and Tony Chachere seasoning.
•Add Rotel.
•Simmer on low until the peppers and onions soften.
•Add sausage and chicken if using.
•Cook until pinto beans are tender. Salt to taste.

•Preheat the oven to 450 degrees. Line a baking sheet with aluminum foil and place the poblano peppers and ear of corn on it.
•Brush the vegetables with the olive oil and roast until lightly charred, 8 to 10 minutes. Cool to room temperature.
•Chop the poblanos and cut the corn off the cob. In a large bowl, mash the avocados with a fork. Stir in the poblano peppers, corn, red onion, cilantro, lime juice and garlic. Season with salt and pepper.

My notes:
—Based on the amounts the recipe called for, I was worried this would just make a little dab. I wanted to bulk it up a little so I used three avocados instead of two, two ears of corn instead of one and of course, extra garlic.
—I roasted my poblanos for 10 minutes which was perfect, but had to roast the ears of corn for a total of 30 minutes to get the desired char.