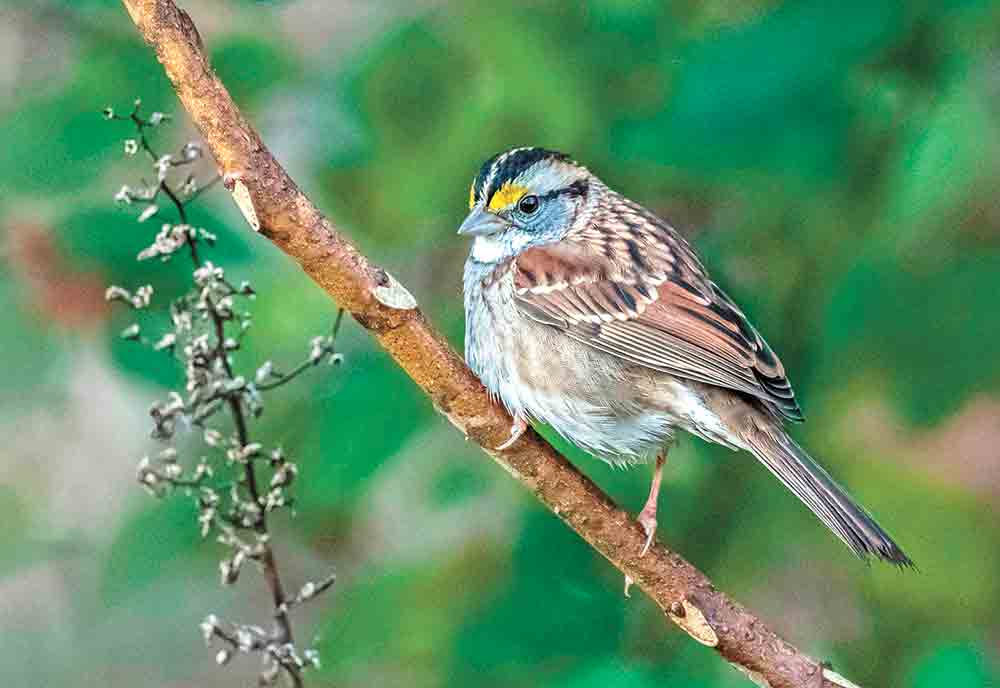 Every year snowbirds leave behind the cold brutal winter of northern states to seek refuge in Texas. No, I am not talking about retirees that seek warmer weather (aka snowbirds), but actual birds that migrate south to Texas and specifically Polk County. Today’s article is going to focus on six of these snowbirds that call Polk County home during the winter months and are abundant in the right habitat.

The second bird is one of the most common woodpeckers in Polk County or at least during the winter months. Yellow-bellied sapsucker (Sphyrapicus varius) is a small woodpecker with a red crown (males also have a red throat) and black and white checkered body. Faint yellowish underparts may also be observed. The easiest way to identify if a sapsucker is present in the forest is to look for almost straight, multiple rows of small holes up and down a tree. Yellow-bellied sapsucker uses these holes to slurp up sap with their tongue and to forage on insects trapped in the sap.

One of most common sparrows in Polk County during the winter months, especially along forest edges and brush lines, is the white-throated sparrow (Zonotrichia albicollis). During winter these birds tend to congregate in large flocks. As the name suggests, this attractive sparrow has a vibrant white throat and black and white stripped head. The bird has a gray chest and a blotch of yellow between the eye and bill. White-throated sparrows forage on seeds and can be easily attracted to bird feeders.

The next bird is a common hawk of the forest but can be difficult to catch more than a glimpse. Sharp-shinned hawk (Accipiter striatus) is a tiny hawk that navigates though the wood with ease in search of prey. Sharp-shinned hawk is the smallest hawk in the United States and is comparable in size between a robin and a crow. While incredibly difficult to catch more than a glimpse in summer locations further north, during migration and during the winter months sharp-shinned hawks tend to congregate and utilize forest edges and openings instead of dense canopy. This makes Polk County the perfect location to view this hawk of the woods. Identifying sharp-shinned hawks can be difficult due to similar color patterns to the common full time resident cooper’s hawk. Other than smaller size, sharp-shinned hawk has a rounded head and square tails compared to the cooper’s hawk that has more of a squared head and rounded tail.

Rudy-crowned kinglet (Corthylio calendula) is a gray to greenish dull colored bird that does not win the bird fashion show. But what it lacks in color it makes up for in energy. These very tiny birds, smaller than warblers, can be seen darting frantically through the lower limbs of brushy areas.  During the winter months the birds congregate in large flocks making them easier to spot. A quick way to identify a kinglet is their behavior of constantly flicking their wings. Rudy-crowned kinglet is named after its brightly colored red crown of the male; however, the crown is only occasionally visible and should not be reliable for identification.

Polk County is home to an abundance of winter snowbirds and no, not just the humankind, but also wintering birds. I encourage you to grab some binoculars and head out to the backroads and woodland trails in the county and see if you can spot some of these snowbirds.