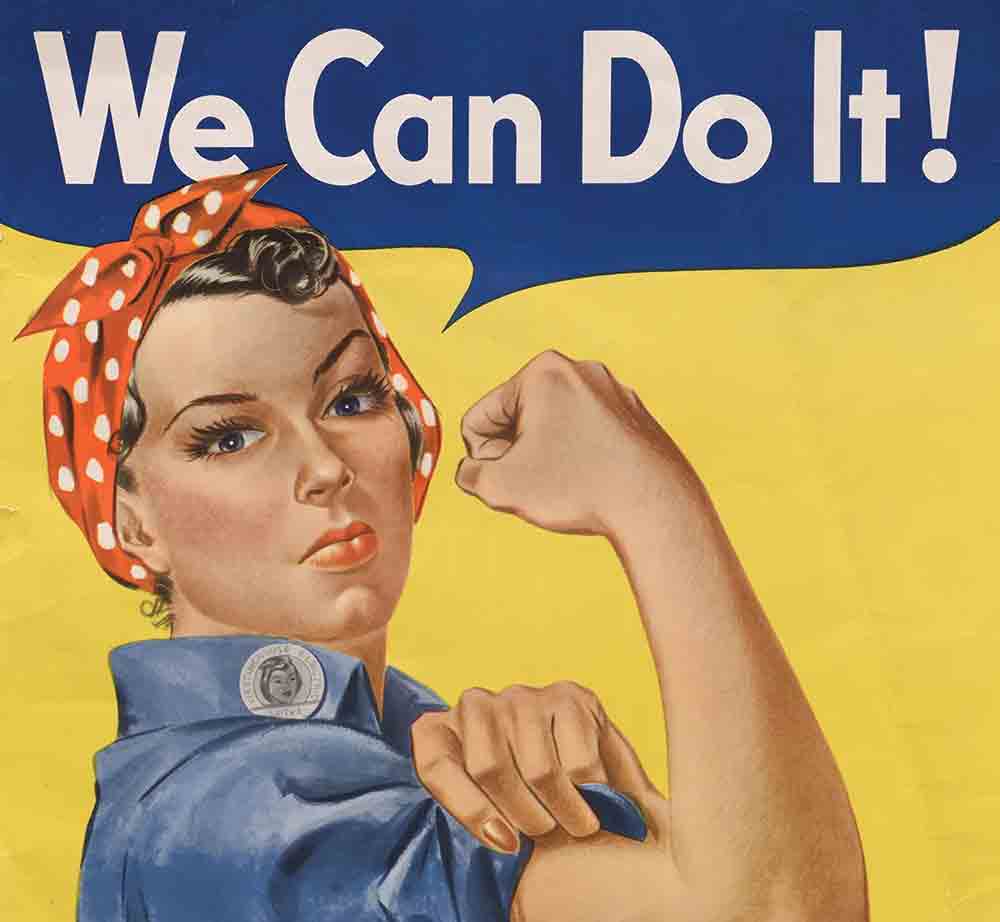 The concept of Rosie the Riveter began during the early years of World War II. Due to the number of men who had left their homes and families to fight in the war, the government mounted an effort to encourage women to join the workforce.

Magazines, newspaper articles, and posters played a vital role in recruiting females. The campaign brought millions of women out of the home and into the workforce, and by 1945 almost one out of every four married women worked outside the home. To this day, “Rosie the Riveter” is considered the most successful government advertising promotion in history.

It was during this campaign that songwriters Redd Evans and John Loeb created a catchy tune which sang the praises of a fictitious female who embodied the spirit of Americanism. Recorded by several popular bands and singers of that era, “Rosie the Riveter” embraced the concept of women joining the workforce, purchasing War Bonds, and sacrificing to help the Allies win the war.

Historians believe that Evans and Loeb wrote the song “Rosie the Riveter” after reading an article about a nineteen-year-old female riveter named Rosalind Palmer, who worked at Vought Aircraft Company riveting the bodies of Corsair fighter planes. Born into a financially influential family from Long Island, Palmer could have gone to Smith or Vassar but instead opted to ‘heed her Nation’s call’ for women to join the workforce. The story was picked up by a well-known syndicated columnist who helped propel its popularity.

Saturday Evening Post cover artist, Norman Rockwell, is credited with creating the actual Rosie the Riveter character. In Rockwell’s poster, Rosie is sitting atop a welding machine, apparently taking a lunch break, sandwich in hand, her welding tool resting across her lap. Rosie has short, tousled red hair, is wearing what looks like a blue uniform, and sits in front of the American flag while a copy of Adolf Hitler’s tract “Mein Kampf” is trampled under her feet. Rockwell says that he used a local girl, nineteen-year-old Mary Doyle Keefe as his ‘Rosie’ model but took liberties with her actual proportions to give her a much larger, powerful, imposing physique. Rockwell’s Rosie the Riveter received mass distribution on the cover of the May 29, 1943, Saturday Evening Post

But a year before that, Westinghouse Company’s War Production Coordinating Committee had hired artist J. Howard Miller to create a series of posters that would motivate female employees who had joined the war effort. Miller’s image is that of an attractive brunette with a red and white polka-dot scarf wrapped around her head and a determined look on her face while she rolls up her sleeve, ready to get to work, with the proclamation “We Can Do It” in bold letters across the top. The image was displayed exclusively in several Westinghouse factories only for a couple of weeks in 1943. And while there were reports that Miller used the picture of an actual female worker at Alameda Naval Base dressed in a bandana and work clothes as the inspiration for his poster, those who worked closely with Miller said he seldom worked with photos.

Over the years, magazines, newspapers, and even movie ‘shorts’ were made about the ‘real life’ Rosies. A couple of weeks before Rockwell’s poster appeared, the press had picked up the story of a woman, Rose Bonavita-Hickey, and her partner, Jennie Florio, who had drilled a record-breaking number of holes and rivets in an Avenger torpedo-bombing aircraft. The duo’s achievement garnered a personal letter from President Roosevelt.

In August of 1943, Life magazine featured a cover photo of steelworker Ann Zarik with her blowtorch, taken by famous photojournalist Margaret Bourke-White. Inside the publication was a photo shoot of other women steelworkers – some wielding torches and working on heavy plate and structural steel, while others worked with steel cauldrons carrying the molten alloy.

Walter Pidgeon made a short promotional film promoting the War Bond effort using a real female riveter named Rose Will Monroe, who worked at Ford Motor Company’s Willow Run aircraft factory. In 1944, a B-grade romantic wartime comedy titled “Rosie the Riveter” featured Jane Frazee as ‘Rosie Warren’ who was an employee in an airplane factory. And long before she became the famous Marilyn Monroe, nineteen-year-old Norma Jean Dougherty was an assembler at the Radioplane factory in Burbank, California.

The connection between Miller’s image and “Rosie the Riveter” is a recent phenomenon. After the poster was rediscovered in 1982, Miller’s rendition became associated with Rosie,

although Rockwell’s Rosie was seen nationwide and was most influential in recruiting females to production jobs.

The identity of Miller’s Rosie has been the subject of debate for years. Some believed that it was Rose Will Monroe, the worker from the Willow Run Bomber Plant, who was featured in promotional films for War Bonds. And, of course, there was the inspiration for Evan and Loeb’s song, Rosalind P. Walter. However, the most popular belief is that the woman in the Westinghouse poster was Geraldine Hoff Doyle, who worked in a Navy machine shop during World War II.

In an interview, Doyle said she was stunned when she saw what she thought was a picture of herself in an issue of Modern Maturity magazine, and when she saw the “We Can Do It” poster on the cover of the Smithsonian magazine in 1994, Doyle again thought it was her image, and conveyed that information to historian Penny Coleman. Doyle’s daughter, Stephanie Gregg, said that her mother “would say she was the “We Can Do It” girl.” When Doyle passed away in 2010, the news media memorialzed her as the model for Miller’s poster without really following up on the veracity of the claim.

It was scholar James J. Kimble who first raised the question about the true identity of the “We Can Do It” Rosie. His decade of research led him to Naomi Parker-Fraley, who had been photographed working in a machine shop at the Naval Air Station in Alameda, California. In the photo, taken in 1942, Parker-Fraley can be seen wearing a uniform and sporting the famous polka-dotted bandana. After Parker-Fraley’s picture was taken, it appeared in newspapers and magazines across the country, and she said she even got fan mail. Although Doyle had innocently asserted over the years that she was the face of Miller’s Rosie, the result of Kimble’s research replaced the long-established Doyle with Parker-Fraley.

In response to Kimble’s announcement in 2016, Parker-Fraley told People magazine she didn’t want to make a fuss that her claim as the “We Can Do It” girl was eclipsed by Doyle. “I didn’t want fame or fortune,” Parker-Fraley stated when her connection to Rosie first became public. “But I did want my own identity.”

So who is the real Rosie?

The truth is that Rosie is every woman who took on male-dominated trade roles, sacrificed their way of life to contribute to the war effort, and represented the American ‘can do’ spirit that continues to inspire women today.