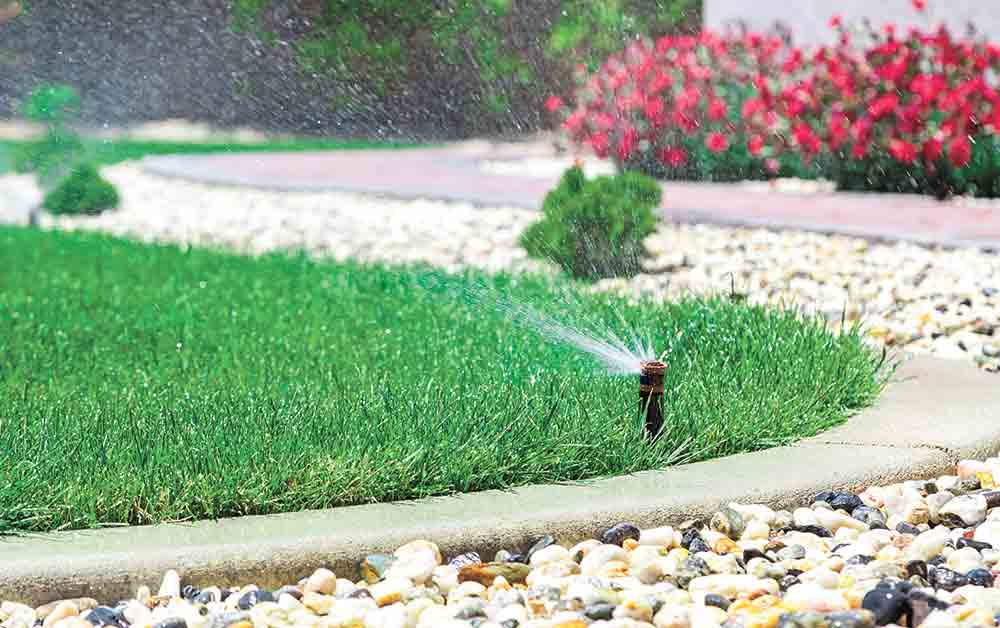 The best control for brown patch disease, however, is turning off the sprinkler system during the fall, winter, and spring. Stock photo

Cooler temperatures and moisture are finally here. If you have a sprinkler system, fertilize more than once, and have a St. Augustine grass lawn, you are almost guaranteed to have experienced brown patch disease (Rhizoctonia), a common fungus associated with cool temperatures, excess moisture, and high fertility. Although the disease is most associated with St. Augustine grass, it can affect centipede and zoysia lawns as well. It’s what I call a “luxury disease,” usually only affecting upscale lawns with sprinkler systems.

Turfgrass affected by brown patch (now known as “large patch”) generally exhibits rapidly expanding circular patches of light brown grass. As the middle of the rings begins to recover and turn green, the resulting pattern is somewhat of a bull’s eye. The classic quick progression is yellow to brown, then back to green in the middle. Brown patch doesn’t kill the grass. It just causes it to look unsightly and proves to your neighbors that you are wasting water and trying too hard.

The bull’s eye symptom is not always reliable for diagnosis. Patches up to several yards in diameter commonly develop in the fall, winter and spring when the grass is approaching or emerging from dormancy, evening temperatures are below 68 degrees, rainfall increases, and sprinkler systems continue to run. Active infections are noticeable by yellow leaves at the edges of patches. Leaf sheaths become rotted, and a gentle tug on the leaf blade easily separates the leaf from the stolon (runner). This common disease develops most rapidly when air temperatures are between 75 and 80 degrees and wet conditions are present but generally subsides when air temperatures rise above 90 degrees. However, it often shows up and slowly spreads during mild winters.

Not over-fertilizing is also important, especially in the spring and fall. High nitrogen increases the likelihood of brown patch. A better option for spreading out the availability of nitrogen is using a product that includes both quick release and slow-release nitrogen (such as 18-6-12 or 28-3-12 professional lawn fertilizers) and fertilizing no more than once or twice per year. You can actually grow a decent lawn with no fertilizer at all.

Fungicides are effective at preventing brown patch but must be applied before the disease occurs or when it first appears and hasn’t already spread. Always remember, insects can be cured but diseases must be prevented. Where brown patch occurs regularly, apply a fungicide containing propiconazole or azoxystrobin each October and March. The best control, however, is turning off the sprinkler system during the fall, winter, and spring. If you only run your lawn sprinkler once per week (one inch per application) during June, July, and August, you generally won’t have brown patch. For more information on brown patch go to aggieturf.tamu.edu and read the publication “How to Diagnose and Manage Large Patch Disease in Warm-Season Turfgrass.”