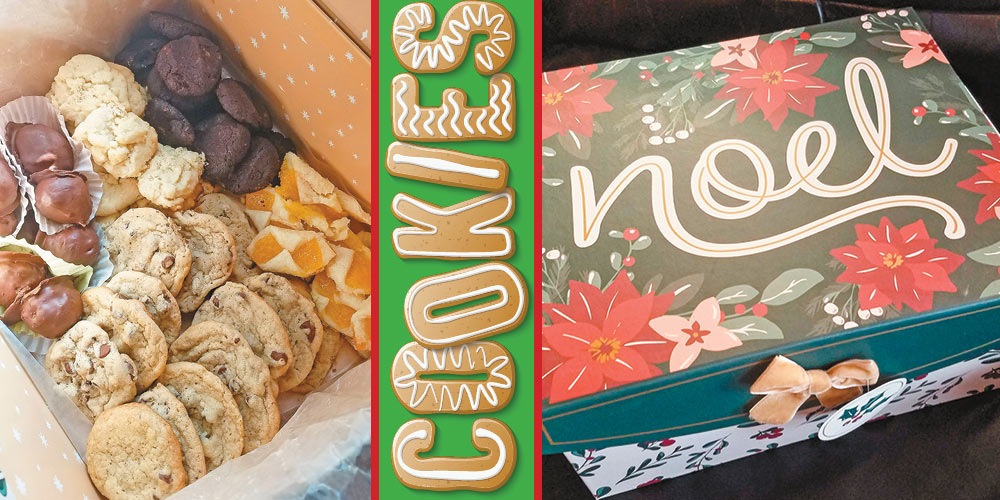 Irecently participated in a Christmas cookie exchange with a group of co-workers for the third consecutive year.

Our instructions were to make fresh, homemade Christmas cookies, accompanied by the recipe. We were to deliver the cookies to the point person on a designated day and on the following day we’d receive a half-dozen cookies of each variety along with a half-dozen of our own, plus the recipes. We were instructed there was no need for special packaging, just seal for freshness and they would be divided and put into containers for delivery.

I considered not participating this year since Hubby and I have been eating “keto” for the last few months and seeing some results. But I enjoy the sight and fragrance of the cookies when I open the box and more than anything, I enjoy writing about them and – with the help of Amanda, my extremely talented page design editor – creating a pretty page for our readers. Plus, there may be readers out there who are also eating keto and would like some sweet treats to fit their own dietary needs. I found a recipe called “Keto Brownie Cookies” that looked wonderful.

So as you can see, my heart was in the right place. But this is where we should cue the 1785 quote from Scottish Poet Robert Burns, “The best laid plans of mice and men often go awry.”

My first mistake, and there were several, was selecting a recipe by a woman from the United Kingdom. No offense to the Brits, but this always involves lots of conversions – Celsius to Farenheit and grams to cups, tablespoons and teaspoons. And while I may have successfully completed a couple of advanced math classes back in the day, it wasn’t without some struggle and gnashing of teeth, something I really don’t need when I’m baking.

My second mistake was waiting til the day the cookies were due to bake them, rather than perhaps an earlier trial run to see how they would turn out, or perhaps how difficult some of the ingredients may be to work with. But more on that later.

When you’re trying to live a keto lifestyle which means no carbs or sugar, but you’d like the occasional sweet treat, there are all kinds of products out there to substitute for good old flour and sugar. However, having never baked keto before, I was completely unaware of the cost of these various substitutes. While lots of keto recipes use almond flour instead of regular all-purpose flour, the particular recipe I was making called for almond butter in place of the almond flour. One container of almond butter was $6.74. And I didn’t realize until I was mid-process – much to Hubby’s chagrin – that I would need a second container which he dutifully went and purchased. There are several types of what I call “fake sugar” out there. You have to look for one with an ingredient called erythritol, whatever the heck that is. I found a 12-ounce granular bag of something called Swerve that was $7.58. The recipe also called for sugar-free chocolate chips and these are hard to find locally. The first two stores I went to didn’t carry them, but fortunately, the third one did – to the tune of $5.22 per bag. When a recipe calls for a quarter cup of sugar-free chocolate chips and I’ll be making five batches, my brain does not operate in a way that allows me to determine if one 12-ounce bag will be enough. So to be safe, I picked up another one of those $5.22 bags.

But back to that almond butter for a minute. I don’t want to bring you down, but that stuff is without a doubt, the most difficult ingredient I have ever worked with throughout all my years of cooking or baking. I’m not sure how something can be oily, sticky, tough and gritty all at the same time, but it is. Dealing with it was a real workout. A friend said, “well it’s just like peanut butter.” But no. No, it is not. If I get peanut butter on my hands, I can grab a paper towel and wipe it off. When this stuff got on my hands, the paper towel just redistributed it, not wiping it off but just making a bigger mess. There’s literally no telling how much hand soap and hot water I went through over the course of those five batches of cookies. Suffice it to say I’ve made a solemn vow with hand on heart that I’ll never use almond butter again.

So in case you’re wondering how the “Keto Brownie Cookies” turned out, let’s just say that they were edible and did help satisfy the desire for something sweet, but they’re not going to go down as anyone’s favorite and realistically, I’ll probably never make them again. However, if you’re up for the challenge, I’ve included the recipe here.
Other cookies in this year’s haul included “Original Nestle Toll House Chocolate Chip Cookies,” “Kentucky Sugar Cookies,” “Apricot Kolaches” and “Martha Washington Candy.”

•Preheat oven to 350 degrees. In a bowl, mix almond butter, cocoa powder, granulated sweetener and the egg with a fork until well-combined.
•If your mix is crumbly, thin it with up to 3 tablespoons of almond milk. The batter should look fudgy and soft, but not runny. Whether you need the almond milk will depend on the texture of your almond butter.
•Stir in the chocolate chips.
•Roll balls with your hands and press them down on a baking pan lined with parchment paper.
•Bake 10-12 minutes until the tops of the cookies begin to show little cracks. Don't over-bake.

•In a large bowl, beat butter, confectioners sugar, milk and vanilla until blended. Stir in coconut and pecans. Divide dough in half. Refrigerate, covered, one hour.
•Working with half the dough at a time, shape mixture into one-inch balls and place on wax paper-lined baking sheets. Refrigerate 30 minutes longer.
•On top of a double boiler or a metal bowl over barely simmering water, melt chocolate chips and shortening. Stir until smooth. Dip balls in melted chocolate, allowing excess to drip off. Return to wax paper. Top with additional coconut if desired. Refrigerate until set.

•Preheat oven to 350 degrees.
•In a large mixing bowl, combine the flour, baking soda, salt and cream of tartar. Set aside.
•In another large mixing bowl, beat the butter and oil. Gradually add in both the sugars until thoroughly combined.
•Add the eggs, one at a time, beating well after each addition. Add the vanilla.
•Add dry mixture gradually to creamed mixture, beating well after each addition.
•Drop dough by teaspoonful onto ungreased cookie sheet. Bake 12-14 minutes. Remove from pan onto cooling rack. Makes about nine dozen.