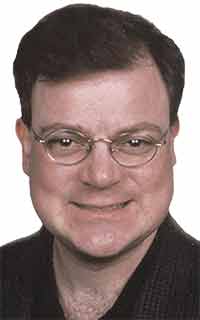 Which is why this joke makes me laugh out loud:

A three-legged dog walks into a bar and sets his pistol on the table.

“I don’t want any trouble,” says the nervous bartender.

I recently watched the 1959 movie, “The Shaggy Dog,” and laughed out loud when Fred MacMurray realizes that his son has been transformed into a talking, shaggy dog.

One of the first movies to feature a talking dog, it was a runaway Disney hit, and I think I know why.

Any human whose home is blessed with a wonderful, silly dog would love for their pups to be able to talk.

Even though some dogs may appear to be voicing human words, such as “I wuvvvv youuuuu,” Scientific American says that dogs cannot talk the way humans do — but scientists do make it clear that dogs can communicate with us.

Thurber and I communicate very well with each other every day.

He is way smarter than I ever expected him to be and he understands the many words, tones and gestures that I use when I ask him to do something or retrieve something.

He tells me when he wants to eat, play, help him get a ball that slid under a chair and many other things.

Thurber uses his eyes, various whimpers, groans and tones to communicate what he wants me to know or do.

When the matter is urgent — such as the need to go Number 1 or 2 — he knows a loud bark will get my immediate attention.

Dogs are way smarter than many people are aware. The average dog can learn about 165 words, but some dogs can learn more than 200 and even beyond 1,000!

If Thurber could talk, I know he’d tell the silliest, corniest jokes, such as this one:

“What do you call a Labrador who does Magic?”

A dog walks into a dentist’s office one evening and says, “I think I’m a moth.”

The dentist says, “I’m sorry, buddy, but I can’t help you. You need to see a veterinarian.”

“I am seeing a veterinarian,” says the dog.

“Then why did you come to my office?” said the dentist.

“Your light was on,” said the dog.

In any event, all of this talk about talking dogs reminds me of the fellow who sees a sign outside a house that reads: “Talking Dog for Sale.”

The fellow walks up to a dog sitting on the front porch, and the dog says, “May I help you mister?”

“You really can talk!” says the man. “You’re amazing!”

“My life has been amazing,” says the dog. “My talking skills helped me communicate with human authorities and other dogs to save avalanche victims in the Alps, as well as earthquake and hurricane victims all over the world. Now semi-retired, I spend my days telling jokes at the local children’s hospital.”

The fellow, flabbergasted, asks the dog’s owner, “Why on Earth would you want to sell an incredible dog like this?”

Tom Purcell is creator of ThurbersTail.com, which shares helpful pet-care tips and funny stories and videos featuring Tom’s beloved Labrador, Thurber. Email Tom at This email address is being protected from spambots. You need JavaScript enabled to view it..