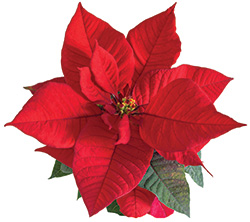 Indigenous to Mexico and Central America, the poinsettia is well known for its red and green foliage and its widespread use in Christmas floral displays. But did you know that, according to Mexican legend, there is a magical story that explains why the poinsettia is associated with Christmas?

A young girl named Pepita wanted more than anything to give a present to the Christ Child at the Christmas Eve Mass. But she was poor and had no money to purchase a gift. As she and her cousin, Pedro, walked to the church, her heart was heavy with sadness when it should have been full of the Joy of Christmas.

Now here’s where the story varies. In some versions, it was Pedro who suggested to Pepita that she gather some of the weeds found on the side of the road and fashion them into a bouquet. Others say it was an angel who appeared to her and gave her the advice. But in both stories, the outcome was nothing short of a miracle.

Pepita entered the village chapel and slowly approached the nativity scene. Tears of embarrassment and sadness trickled down her face as she laid her crude bouquet at the feet of the baby Jesus. But as she did, the weeds suddenly burst into blooms of brilliant red. Those who witnessed the event recognized the phenomenon that had taken place in front of them. From then on, the bright red flowers were known as the Flores de Noche Buena, or “flower of the holy night,” and they bloomed each year during the Christmas season.

In their native region of southern Mexico, the perennial shrub was once considered a weed and can grow ten to 15 feet tall in the wild. The Aztecs used the poinsettia to make a reddish-purple dye for fabrics and used the sap medicinally to control fevers. The leaves of the plant are called ‘bracts,’ and the plant’s actual flowers are the beads found in the center of the bracts.

The crimson plant might have remained a regional flower had it not been for the efforts of Joel Roberts Poinsett, the son of a French physician. Poinsett was appointed as the first United States Ambassador to Mexico by President Madison. Poinsett, an avid amateur botanist, became enchanted by the brilliant red blooms of the flores de noche buena, and sent some of the plants back to South Carolina, where he began propagating them and sending them to friends and botanical gardens.

By 1836, the plant was widely known as the poinsettia in recognition of the man who first brought it to the United States. In 2002, Congress honored Joel Poinsett by declaring Dec. 12 as National Poinsettia Day, commemorating Poinsett’s death on that day in 1851.

Today, poinsettias are the number one potted plant sold in the US. There are over a hundred varieties of the plants, from the traditional red to shades of white, peach, pink, and yellow, and some are now available in marbled, striped, and spotted tones.

Whether you pronounce it ‘poin-set-ee-uh,’ others ‘poin-set-uh,’ according to legend, if you receive a poinsettia plant as a gift, it will bring you good luck and prosperity during the holiday season.