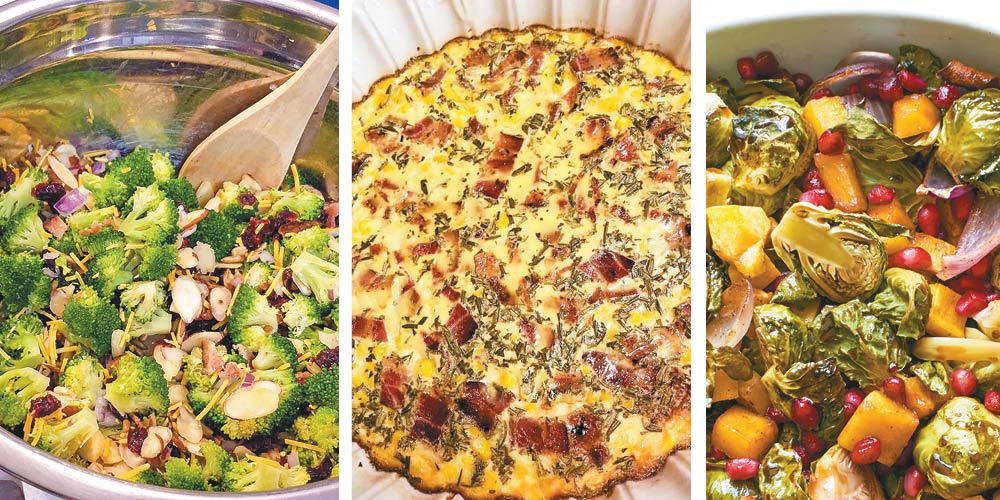 We (me) opted out of cooking for Thanksgiving this year and decided to have a relaxing little getaway instead, complete with reservations for what promises to be a lovely Thanksgiving buffet.

In our family, I’ve always been known for my good Thanksgiving side dishes. Realizing that we may be in the minority with our plans to eat out, I decided to share with you some of my favorite Thanksgiving sides from years past.

In 2015 I found a recipe in Food Network Magazine for “Brussels Sprouts with Butternut Squash and Pomegranate Seeds” that looked and sounded delicious. I’m a huge lover of Brussels sprouts and am always looking for new and different ways to prepare them. And the picture in the magazine was so colorful and beautiful, I knew it would look good on our Thanksgiving table. It turned out wonderfully and was well-liked by all. As 2015 was way before I started writing about, and photographing, food, there are no pictures of it. However, I did take a picture of the picture in the magazine so that you can see how pretty it is.

I discovered a recipe online for “Cranberry Almond Broccoli Salad” that intrigued me that I made for Thanksgiving 2019. It was delicious – fairly healthy and full of different textures. It was so good, in fact, that I don’t see why it couldn’t be enjoyed throughout the year.

Several years ago a friend gave me a subscription to a magazine called “Eating Well.” I wasn’t familiar with it prior, but it immediately became one of my favorite magazines. Unfortunately, it has ceased publication although it does still have an online presence. Anyway, in one of the issues leading up to Thanksgiving 2020 was a picture that looked absolutely divine. It accompanied a recipe for something called “Corn Pudding with Bacon & Rosemary.” It was delicious and quickly became a crowd-pleaser.

I hope some of these appeal to you, that you will make them and that they might become favorites for your family’s Thanksgiving table. Happy Thanksgiving to you all and happy eating!

•Preheat oven to 400 degrees.
• Use a knife to lop off the top and bottom of the squash. Slice the skin off the sides, then cut the squash in half lengthwise and remove the seeds. Chop into small pieces. Divide the squash between two baking sheets.
• Trim the Brussels sprouts, then cut them in half if desired (or you can leave them whole). Arrange on the baking sheets with the squash. Break the quartered onions apart and add them to the baking sheets.
• Drizzle the vegetables with the olive oil. Season with salt and pepper, sprinkle with the chili powder and toss. Roast 30 to 35 minutes, or until browned.
• Take the vegetables out of the oven and tip into a serving dish. Drizzle with the pomegranate molasses and sprinkle on the pomegranate seeds. Toss and serve immediately.

My notes:
— The butternut squash is a bit tough to cut. Use a sharp knife and be very careful. I didn’t think about using my electric knife, but may try that next time I make this.
— I was unable to find pomegranate molasses but discovered that if you take pomegranate juice and reduce it in a saucepan on the stove it becomes pomegranate molasses.

•Bring a pot of water to boil. Chop broccoli into very small florets and set aside. Fill a large bowl with cold water and a cup of ice cubes.
•Add a generous pinch of salt to boiling water and add broccoli. Boil for 20 seconds. Drain broccoli and transfer to the prepared bowl with ice water. Let broccoli sit in cold water for a few minutes, until cool. Drain and lay broccoli out onto some paper towels to drain. Allow to continue air drying while you prepare other parts of the recipe.
•To a small mixing bowl, add poppyseed dressing ingredients, then whisk together until smooth and combined. Set aside.
•Add finely chopped red onion to a small bowl of cold water and let sit for five minutes, then drain. This takes some of the “bite” out of the raw onion.
•To a large mixing bowl, add dried broccoli florets, bacon, drained raw onion, cranberries, almonds, sunflower seeds and cheddar cheese. Toss with citrus poppyseed dressing (start with about half the dressing and increase to your liking).
•Cover with plastic wrap and refrigerate for at least 30 minutes. Toss and serve.

Recipe notes:
—Letting the salad sit in the fridge for 30 minutes or more allows the flavors to really combine and will make for a more flavorful salad.
—It can be made up to 24 hours in advance.

By Carolyn Malcoun
From eatingwell.com

• Preheat oven to 350 degrees. Coat a 9-by-13-inch baking dish with cooking spray.
• Cook bacon in a large skillet over medium heat until crisp, about 7 minutes. Drain on a paper-towel-lined plate.
• Whisk 1 egg, cornstarch and baking powder in a large bowl until smooth. Add the remaining eggs and whisk until combined. Whisk in milk, crème fraîche (or sour cream), salt and pepper. Fold in corn and rosemary. Pour the mixture into the prepared dish. Crumble the bacon over the top.
• Bake the pudding until it is puffed and golden around the edges and still slightly jiggly in the center, 40 to 55 minutes. Let cool for 15 minutes before serving.
• To make ahead: Refrigerate for up to 2 days. Reheat at 350 degrees for 15-20 minutes.

My notes:
—I used sour cream.
—I used fresh rosemary as it grows rampant in my friend’s backyard and is there for the taking. Plus, I think there’s no comparison between the fragrance of fresh rosemary versus dried.
—As you can see from the picture, I didn’t bake this in a 9-by-13-inch baking dish but instead used a beautiful big round serving dish that was a wedding gift. I thought it made for a prettier presentation.
—You can make this the day before Thanksgiving and just reheat it on Thanksgiving day.