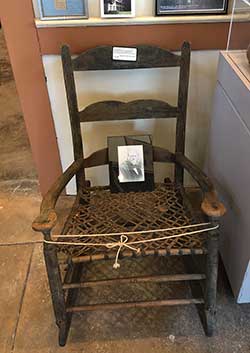 Sam Houston sat here. PHOTO BY JAN WHITE|HCCCROCKETT – Set at the end of an innocuous-looking road, located just a few feet away from the railroad tracks that run parallel with First Street with an overpass over El Camino Real, is one of Crockett’s greatest little treasures that newcomers and visitors to the area might not be aware of - the Houston County Visitors Center and Museum.

Locally known as the train depot museum, the building is open most Fridays and Saturdays from 11-3. The former train depot has been converted to house some of Crockett’s finest historical artifacts. From a room filled with military uniforms and war memorabilia to a full-size antique 1929 Seagrave fire engine, the museum has done its best to collect and safeguard local culture.

Built in 1909, the structure was the third depot built of concrete and brick. In 1982, former Houston County Historical Commission Chairman Eliza Bishop, along with Crockett Chamber of Commerce representatives, went before the Railroad Commission to attempt to either continue the Missouri-Pacific Railroad service or, if not, to save the depot and use it as a museum. In 1993 the depot was deeded to the Houston County Historical Commission, and in 1993, was chartered as the Houston County Visitors Center, Museum, Inc.

Along with preserving history, the museum offers perspective. With its careful documentation and preservation of artifacts, the stories behind each item bring Crockett’s history, and the history of the times, to life. Many of the displays not only show how clothing styles have changed, but the items like dresses, shoes, and furniture also illustrate the human body’s evolution. Rows of antique typewriters, adding machines, and other office paraphernalia serve as a reminder of how much technology has progressed over time.

Because of its focus on Houston County’s heritage, several new additions have recently made their way to the train depot – two historical portraits and an iconic neon sign. Artist John R. Thomasson, a Crockett native known locally for his artistic interpretations was asked by museum curator Dorothy Harris, if he would paint a portrait of Sam Houston and one of Davy Crockett for the museum. Harris relates the story.

“I called John Russell and asked him ‘John, how much would you charge me to paint me a picture of Sam Houston and one of Davy Crockett?’ And he said, ‘Nothing.’ Really, I was just so happy,” said Harris. “John asked me, ‘How much space do I have to work with?’ and I told him, ‘Well, we have sixteen-foot ceilings, so I’ll leave it to you.’ And about three weeks later, he showed up with these. Aren’t they just gorgeous?” Harris estimates that the paintings stand about four feet tall.

The other recent acquisition was the neon sign that once lit up the storefront of a local business, Perdue’s Jewelry. Although Harris wasn’t sure exactly when the jewelry store became a Crockett fixture, she does recall the store from when she was a young girl. “I was seven years old,” Harris said, “and that was in the 40s.”

One could easily write a story on every section of the museum – about the fire truck that was used during the fire that took out the Crockett Hotel, the first telephone booth in Crockett, the antique autoclave from the old hospital, or the chair that Sam Houston sat in when he came to Crockett, and much, much more.

If you haven’t had to opportunity yet, or if it’s just been a while since you visited, make time in your schedule to visit the Houston County Museum. There is no cost, but donations are welcome. The museum is located at 101 South First Street in Crockett. For museum hours, call (936) 544-9520.