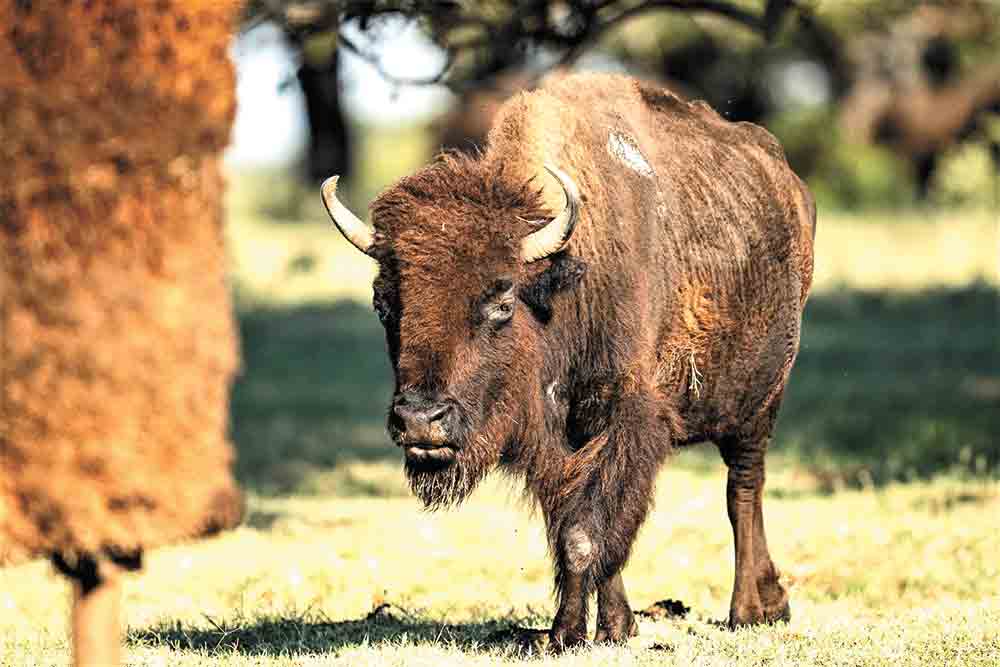 Blood-feeding flies and other parasites are a major hurdle for bison not adapted to the southern U.S. Parasite infestations can impact body condition scores, introduce diseases and stress animals. Photo by Texas A&M AgriLife photo by Sam Craft

Texas A&M AgriLife Research, including student projects, continues to advance science related to management of bison in Texas for conservation and production.

Perry Barboza, Ph.D., AgriLife Research professor in the Departments of Ecology and Conservation Biology and Rangeland, Wildlife and Fisheries Management, said research into the sustainability of bison in Texas for production and conservation is focused on addressing basic challenges and establishing foundational knowledge.

Barboza has supervised student research related to bison, a species that once ranged the length of the Great Plains within the two Texas A&M College of Agriculture and Life Sciences departments.

Bison could become an increasingly important animal option for Texas ranchers, but for now, they represent a niche opportunity, he said. Meat commands a premium – around $9 per pound for ground bison – but production is limited by problems ranging from parasites and disease to temperament.

Most bison are marketed as yearlings between 300-500 pounds, Barboza said. This makes each animal’s body condition and maximizing daily weight gain vitally important for producers.

Much of the early projects conducted by undergraduate and graduate students are designed to answer basic questions related to bison management under production conditions.

“There is the possibility of using bison more than cattle if enterprises want to use them at lower stocking rates and to increase the diversity of pasture,” he said. “Bison are much more tolerant of drought, so an operation might run separate herds of cattle and bison to balance the economic and ecological goals for the rancher.”

Widespread adoption of bison as a livestock production option hinges on researchers like Barboza identifying scientific methodologies to make them a sustainable addition to Texas ranching operations. Problems with internal and external parasites are a major problem, especially in regions with moisture.

“There are some realities we need to address from conservation and production perspectives when it comes to sustainability of bison in Texas,” he said. “We’re still moving through the basics, but every step we take is helping us better understand the challenges and develop strategies or define limitations.”

Blood-feeding insects like flies can directly injure bison, but can also act as a vector for pathogens, he said. Researchers are not yet certain exactly what species of flies are attracted to bison in Texas, which means there is no reliable means of treating them.

Bison are also difficult to treat with topical pesticides, he said. They are generally more difficult to handle and manage, and their temperament adds another challenge for producers.

A few of Barboza’s students have engaged with local ranches with bison to study their body condition scores, the negative impacts of blood-feeding flies and whether bat colonies could be an effective way to control fly populations.

Bridgett Benedict, a graduate student in the Department of Ecology and Conservation Biology, has studied the impacts of flies on northern ungulates, including moose and bison. Her work “Adverse effects of Diptera flies on northern ungulates: Rangifer, Alces and Bison,” published in Mammal Review investigated the cumulative damage of bites and vectored disease in relation to body condition and exposure to pests.

Benedict’s work has helped lay the groundwork for understanding how flies could impact production, including body conditions and daily weight gains, Barboza said.

Another study by an undergraduate student in the department, Wyatt Stinebaugh, branched from Benedict’s research. It focused on whether bats might share a commensal relationship with bison, which might make introduced bat colonies a potential biological method to control fly populations.

Stinebaugh used acoustic monitoring equipment at seven sites – two with bison present, one site with cattle and four control sites with no bovids present – between March and November 2021. Insects were also trapped at the sites from March to May 2021.

The study did not find a commensal connection between bats and bison or conclude that bats would be an effective control method, but bat colonies near sites with bison and cattle could help keep swarming events in check.

Temperatures also play a factor in the negative imvwpact pests inflict on bison, Barboza said. Insect activity related to the environment, and weather conditions in Texas make them a near-year-round problem.

“Some flies are opening the wound up, and some are keeping it open, and some are living on the animal and rarely let go,” Barboza said. “We’re looking to get the animals to a body condition score sweet spot and provide the solutions to keep them there, with some combination of diet, insect control and parasite treatment.”

Much of the research has been in cooperation with the Texas Bison Association and National Bison Association and other laboratories and researchers at Texas A&M, including the Department of Entomology and the Parasitology Laboratory in the School of Veterinary Medicine and Biomedical Sciences.

Barboza said the work will be critical for reestablishing bison herds in Texas. Most bison come from northern states like the Dakotas and are acclimated to cooler climates, pests and diseases there.

The loss of southern-adapted bison phenotypes is a hurdle researchers will continue to address. The Great Plains once supported 30 million to 50 million bison, including those that adapted better to southern climates and pests that thrive in them.

Research and breeding programs could help bison establish new adaptations as bison are selected for attributes better suited for Texas and production, including temperament and parasites, he said.

“Bison is still a niche market, so it is tough for small producers to find value and reliability and consistent performance under normal conditions,” Barboza said. “Bison can tolerate a lot of things if we can get past issues with diet, insects and parasites.” n