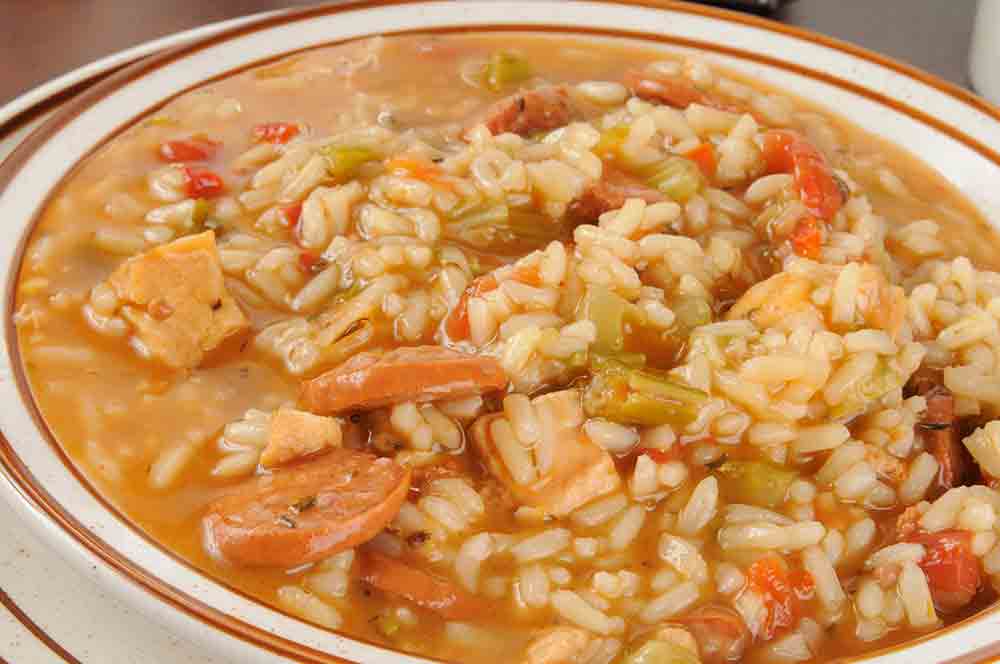 My Aunt Goldie who lived in Lake Charles, Louisiana with her soft-spoken husband CA was known in our family for her delicious seafood gumbo. Goldie, Dad’s younger sister, was probably not five feet tall in heels. Her frequent smile and playful banter revealed a nature that was immediately warm and loveable. In South Louisiana, gumbo is a dish often prepared when families and friends get together. The first thing one noticed upon entering Aunt Goldie’s house was the enticing aroma of seafood gumbo.

Gumbo combines ingredients and culinary practices from several cultures. It may have been based on traditional native Choctaw stew or it may be a derivation of the French dish bouillabaisse. The dish shows African, Spanish and Caribbean influence and when German immigrants settled in Louisiana, sausage was added to the pot. All these cultures contributed to the recipe we now recognize as gumbo. It was first described in 1802 and was listed in various cookbooks in the latter half of the 19th century. The dish gained more widespread popularity in the 1970s after the United States Senate dining room added it to the menu in honor of Louisiana Senator Allen Ellender. The name gumbo most likely comes from the African word for okra. However, the Choctaw word for the ingredient filet (pronounced fee-lay) is also similar to the word gumbo.

Preparing gumbo begins with the roux. Roux is a mixture of equal parts fat and flour and cooked to the desired level of brownness. In classic French cuisine, the fat is butter. Roux is used in three of the five mother sauces of classic French cooking; béchamel, velouté, and espagnole sauce. Our cream gravy is what chefs would call a blonde roux as it is not cooked as long and is therefore less brown. In Gumbo, the fat is typically vegetable oil and often some butter is added for flavor. Olive oil is not recommended for making roux due to its low smoke point which means it will burn before you can brown the flour. The roux is cooked over low heat with constant stirring to create the characteristic dark brown color and flavor of gumbo. When browning your roux, don’t stop stirring and cook until it is the color of milk chocolate. Once there, remove it from heat so as not to burn it. If you prefer a short cut, there are some very good pre-made jarred roux but don’t tell Aunt Goldie or other Louisiana relatives I said that.

Gumbo is a spicy dish with many layers of flavor. An easy way to capture the flavors of South Louisiana is to use a Cajun seasoning mix, something like Tony Chachere’s. But if you read the list of ingredients, it’s very easy to mix your own Cajun seasoning using spices you already have. This saves money and you won’t have to make room for another spice in the rack. My recipe provides a good alternative to the relatively expensive Cajun mix you will find in the store. You will have to buy gumbo filet. This native American spice is made from the ground leaves of the sassafras tree and is one of the required ingredients for gumbo. Adding it to Gumbo or soups after it is cooked and just before serving will thicken it and add a delicate flavor.

A pescatarian is not a pesky vegetarian but rather one who abstains from meat yet includes fish. If you happen to have a wife who is a pescatarian, you can adjust my recipe by replacing the chicken broth with vegetable broth and omitting the sausage. Kathy went back for seconds on her batch of pescatarian gumbo. For me, the andouille sausage adds yet another layer of flavor. I believe Aunt Goldie would approve either rendition.

Tim Scallon is a registered dietitian nutritionist with years of experience practicing nutrition therapy in local hospitals and clinics, teaching nutrition and developing healthy recipes. He is a Nacogdoches resident and he helped create the popular TV show Memorial Cooking Innovations celebrating the world of food and health. Memorial Cooking Innovations has featured in 62 cities and is locally available on Sudden Link cable channel 2 in Nacogdoches.