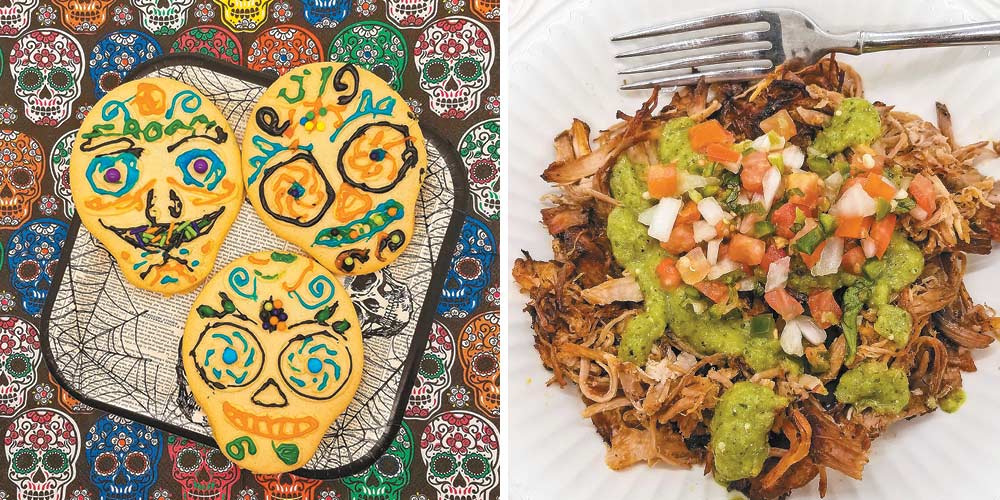 I've always been fascinated by Day of the Dead, or Día de los Muertos. Having originated in Mexico, it is a holiday traditionally celebrated on Nov. 1-2 in which family members and friends who have passed away are remembered and celebrated.

Although it is often associated with the Western Christian Allhallowtide observances of All Hallow’s Eve, All Saints’ Day and All Souls’ Day, according to the National Geographic Society, it has a much less solemn tone and is portrayed more as a holiday of joyful celebration rather than mourning. The multi-day holiday involves family and friends gathering to pay respects and to remember friends and family members who have died. These celebrations can take a humorous tone, as celebrants remember funny events and anecdotes about the departed.

There are numerous traditions connected with the holiday, each with a meaning designed to encourage souls that have passed to return and participate in the celebration. Those observing Day of the Dead create altars in their home, called ofrendas, to honor the deceased with photos, favorite foods and beverages and little trinkets or gifts. Other traditions include using skulls, or calaveras, and marigold flowers.

The celebration is not solely focused on the dead, as it is also common to give gifts to friends such as candy sugar skulls or to share traditional pan de muerto, a traditional Mexican sweet bread, with family and friends and to write light-hearted and often irreverent verses in the form of mock epitaphs dedicated to living friends and acquaintances, a literary form known as calaveras literarias.

In 2008, the tradition of Day of the Dead was inscribed in the Representative List of the Intangible Cultural Heritage of Humanity by the United Nations Educational, Scientific and Cultural Organization (UNESCO).

I would never want to be accused of cultural appropriation, but I do think Day of the Dead is a beautiful, vibrant tradition that is a very loving and happy way to remember our loved ones who are no longer with us. And while we haven’t as yet incorporated it into our household, I did recently prepare a meal with a Mexican bent and attempt a fun project with Daughter with Day of the Dead in mind.

I’d run across a recipe for Slow Cooker Chipotle Carnitas that looked and sounded wonderful and I knew it would pair well with an old recipe of mine for Salsa Verde. For most people, this would be the beginnings of a taco night, but as we’re still diligently following our keto diets, we left out the tortillas and filled bowls with the flavorful carnitas topped with the salsa verde and some pico de gallo.

A recent trip to Walmart turned up a Day of the Dead cookie kit with 16 baked vanilla skull-shaped cookies, multi-colored “icing writers” and colored sprinkles and beads for decorating the cookies. It looked like it would be easy and fun and Daughter could enjoy some and take the rest to school for her friends. Well, it wasn’t easy at all, but we did have fun with it. I couldn’t help but chuckle as I threw the box away when I read on the side of it that it was “skill level 1,” “perfect for little hands,” and “recommended for ages 3 and up.” No way! You’ve got to be kidding me! I can’t imagine a three-year-old attempting this project that my teenager and I struggled with amid laughter. Whatever you may celebrate this time of year, enjoy!

•Place garlic, lime juice, oil, salt, black pepper, oregano, onion powder, cumin, peppers and adobo sauce in a small food processor. Pulse until well combined, and a paste is formed.
•Rub the pork shoulder with the chipotle paste, rubbing it thoroughly on all sides. If time allows, let the pork marinate for 30 minutes up to overnight.
•Place orange juice, chicken broth, bay leaves and seasoned pork shoulder into a slow cooker. Cook for 8 hours on low or 4 hours on high, until internal temperature reaches 145 degrees on a food thermometer. The pork should be so tender that meat falls apart easily.
•Remove pork from the slow cooker and shred the meat using two forks, removing excess fat. Taste and adjust seasoning if needed.
•Heat oven to broil. Line one baking sheet with foil and spray with cooking oil. Place carnitas onto a baking sheet with a cup or so of the juices and broil until most pork looks golden, crisp, and crusted about 4 minutes. Remove from oven. Garnish carnitas with chopped cilantro, if desired.

My Notes:
I’ll definitely make this again but next time I’ll skip the step of putting them under the broiler to crisp. We found that this step took away the moisture, making the carnitas too dry.