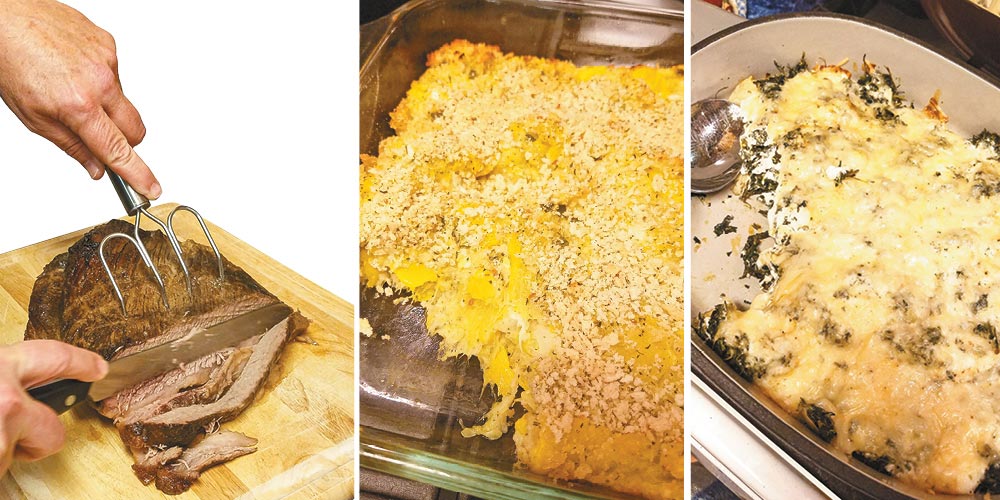 I cooked my very first brisket this week. It wasn’t the best brisket I’ve ever eaten but it was okay and I know what I’ll do to improve upon it in the future. A rather circuitous route led me to that brisket. Several weeks ago I found myself going through some old boxes trying to get rid of stuff and I ran across a special anniversary edition of the food section from the Houston Chronicle. The yellowed, tattered paper was dated April 17, 1996 and was entitled “Celebrating 30 years of Great Recipes” by Food Editor Ann Criswell. If you’re from anywhere within the Southeast Texas/Gulf Coast region then you’re familiar with Ann Criswell. An institution in her own right, Criswell joined the Houston Chronicle in 1961 and became its first food editor in 1966, serving in that capacity until her retirement in 2000. She was well-loved and respected by many.
As I carefully turned the pages, looking at the pictures, recipes and articles in a newspaper section that was now actually 26 years old, something about the discovery of the old section just seemed fortuitous to me. Criswell became the food editor in 1966, the same year that I was born, proving once again that 1966 was a very good year.
The section included a tremendous article written by Criswell in which she explored the myriad changes in food, cooking and dining over 30 years, even referring to it as a revolution. There are numerous color pictures of various dishes, many of them contest-winners by Houston-area home cooks.
The more I pored through the section, the more I wondered what Criswell was up to these days. An internet search quickly revealed that she died Dec. 15, 2020 of complications from COVID-19 at the age of 87. I found a Houston Chronicle article dated Dec. 15, 2020 and written by Greg Morago that was a moving tribute to one of the Bayou City’s culinary icons. One paragraph in particular caught my eye. “But it was Criswell’s tireless work on behalf of everyday home cooks that endeared her to Houston Chronicle readers. She engaged directly with subscribers, taking their calls and answering their unending cooking questions. She became a spirit guide for those eager to try new recipes.” This is so true and quite possibly the primary reason she was so well-loved.
Learning that Criswell was born on Oct. 26, 1933, I quickly made the decision to write this column as sort of a birthday tribute in her memory. I even selected several recipes from that 30-year anniversary section to prepare for my family. I’m including the recipes here, exactly as they were written and appeared, including Criswell’s lead notes. I hope this brings back fond memories and I also hope that on Oct. 26 we all raise a glass to Ann Criswell.

The Black-Eyed Pea restaurants are known for home-cooking specialties. Among the Food section’s most-requested recipes of all time is this baked squash.

• Cut off tips of squash, then cut each squash into 3 or 4 pieces. Drop squash into a large saucepan with enough boiling water to cover. Return to a boil, reduce heat and cook until tender. Drain squash in colander, then place in a large bowl and mash.
• Stir in eggs, bread crumbs, butter, sugar, salt, onion and pepper. Spoon mixture into a 3-quart casserole that has been lightly greased or coated with vegetable oil spray. Sprinkle a light layer or bread crumbs on top, then bake in preheated 350-degree oven until lightly browned, about 30-40 minutes. Makes 12 servings.

Pat Archer, wife of U.S. Rep. Bill Archer, R-Houston, has converted many a non spinach eater to the leafy vegetable with this casserole. The recipe was published in the Food section March 17, 1977, in a feature about Texans living in Washington.

•Place artichokes in a 1 ½-quart casserole. Squeeze spinach dry. Place on top of artichokes. In a small bowl, beat cream cheese and butter until smooth. Stir in milk. Spread over spinach. Top with a grind of pepper and Parmesan. Cover and refrigerate as long as 24 hours. Bake, covered, at 350 degrees 30 minutes, then uncover and bake 10 minutes. Makes 6 to 8 servings.

This makes great brisket without the fuss of setting up an outdoor barbecue.

•Trim brisket, leaving a little fat. Place flour and soup mix in oven cooking bag; toss to mix. Rub both sides of meat with garlic powder, pepper and Worcestershire. Place meat in bag in a 2-inch-deep pan. Pour bouillon into bag, moistening both sides of beef. Tie open end of bag with string, leaving an opening the size of a quarter. Insert oven-safe meat thermometer into beef. Roast brisket at 300 degrees until done, about four hours. Makes 12-15 servings