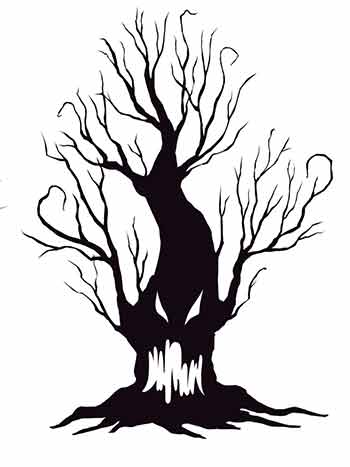 H.C. Lovecraft once said that our greatest fear is the fear of the unknown, and no season of the year plays on those fears more than fall - when night falls early, the shadows grow longer, and the air gets a little chillier. And as All Hallows Eve grows closer, the lines between the earthly and supernatural worlds blur, and unexpected things can happen. This is how urban legends are born. From the creepy to the unexpected to the macabre, these stories have withstood the test of time. So huddle under a cozy blanket, turn off the lights, and hunker down with a cup of hot chocolate to set the mood as you delve into these Halloween urban legends.

A young woman wanted to wear an authentic costume for the “Roaring Twenties” themed Halloween party, so she asked her grandmother if she could rummage around in her attic. The grandmother agreed, and while exploring the attic, the young girl stumbled across an old trunk of clothes. In it, she discovered an old 1920s “flapper” dress, complete with a fringed hem, a feather boa, and even a jeweled cigarette holder. She held the dress up in front of her, eying her reflection in a tall mirror. It was perfect. But her hair was all wrong. She needed a “bobbed” hairdo from the period to complete the look. After a little more digging, she found a wig in exactly the style she needed.

Later that evening, she dressed for the party, thrilled with her “gangster’s moll” look. Everyone at the Halloween gathering complimented her on how great she looked, but after a while, she noticed her head was itching. Having never worn a wig before, she figured it was just natural that it would feel so prickly and crawly, and she mentioned it to one of her friends, who was standing nearby.

“I don’t think I can wear this thing all night,” she said, scratching her head again. Her friend looked at her and let out a bloodcurdling scream, pointing to the wig as spiders began crawling out from under it, down the girl’s face and neck.

The young woman brushed at the spiders as they traveled down her arms, and she reached up to jerk the wig from her head, throwing it to the floor. It seems that a spider had spun a nest inside the wig, and the warmth of the young girl’s head had induced the eight-legged creatures to hatch. A sea of baby spiders burst from the wig and began scattering across the floor. Freaked out at the thought that spiders might still be tangled in her hair, the girl began pulling out clumps of hair and scraping and clawing at her face. It took several friends to subdue her until an ambulance arrived and carted her away on a gurney, screaming, her hands confined by wrist straps to keep her from touching her face, now shredded and dripping blood from where she’d continued clawing long after the spiders were gone.

The house at the end of the street

The Morrisons always went to great lengths to decorate their house for Halloween and retain the title “the scariest house on the block.” There was always an element of surprise to the decorations. Sometimes Mr. Morrison would dress as a deranged murderer, hide behind a tree, or jump out from the bushes in front of the house to startle the trick-or-treaters. Last year, a very realistic-looking corpse would reach out and grab their arms as they peered into his casket.

This year, the Morrisons invited their neighbor, John, to join in the festivities. John was a bachelor, kind of shy, and didn’t really have the creativity the Morrisons did when it came to Halloween décor. John reluctantly accepted the invitation, telling the Morrisons that he’d rather be more of an observer than a participant, but the Morrisons insisted. They didn’t feel comfortable letting him in his house alone with the lights out, as he’d done on previous Halloween nights.

As they expected, John spent most of his time in the shadows of the living room, quietly watching as Mrs. Morrison greeted the Halloween visitors with bowls of candy while Mr. Morrison, dressed like Freddy Krueger, jumped out at unsuspecting kids, slashing at them with his brown leather, plastic-clawed glove.

All night long, trick-or-treaters complimented the Morrisons on how realistic their decorations were and how scared they were when “Freddy” ran at them. Toward the end of the evening, one of the teenagers mentioned that he really liked the shadow in the second-story window that looked like someone hanging from the ceiling.

Startled, the Morrisons rushed upstairs to find John’s lifeless body dangling from the ceiling fan where he had killed himself using his belt as a noose.

Late one Halloween night, a nurse was driving home from her graveyard shift when she noticed a car following her. It was odd that another vehicle would be out on the seldom-traveled blacktop to her house, but she dismissed it as just a fluke coincidence. That is, until the driver of the car began to flash its high beams off and on sporadically.

Mildly concerned now, the nurse sped up a bit, thinking that maybe she could lose the annoying vehicle, but when she increased her speed, so did the car behind her. She grabbed her phone off the seat beside her, hit 9-1-1 on her speed dial, and told the dispatcher that someone was chasing her. Instead of advising her to keep going until a patrol car could catch up, the dispatcher told her to pull the car over and immediately exit the vehicle.

Confused with the advice, the nurse kept on driving, arguing with the dispatcher until a police car pulled out from a side street ahead of her and blocked her way, forcing her to stop. The dispatcher once more insisted that she get out of the car and run to the police vehicle. As a policeman emerged from his car, he ordered her to get in the backseat while he and his fellow officer drew their guns. As she headed for the patrol car, she noticed the car that had been following her was stopped several yards behind. But that car wasn’t the focus of the police officers who moved cautiously toward her vehicle.

The first officer approached the driver’s side while the other moved around to the passenger side. They stood with their guns and flashlights aimed at the backseat.

More police cars arrive at the chaotic scene. As the nurse watched from the patrol car, the officer dragged a man from the backseat of her car and threw him to the ground while the other reached in and retrieved what looked like a long-bladed knife, glinting in the moonlight.

Later she learned the whole story – that the car flashing its lights was driven by a woman who saw the man sit up in the back seat holding what she thought was a knife. She had called 9-1-1 and reported the incident, hoping that flashing her lights would expose the man and keep him from harming the nurse before the police could chase her down and rescue her.

There is a photo from 1962 that helps perpetuate a legendary story about a Halloween massacre. The story goes that a group of partiers gathered for their annual neighborhood Halloween celebration. One of the guests, presumably the prominent one in the black mask in the photo, locked them in the house and murdered seven partygoers with a kitchen knife before the night was over. The masked slayer was never caught.

As with all urban legends, it’s up to the reader to decide whether or not they are true. But just in case - this Halloween I’d recommend not wearing old clothes from Grandma’s attic, check your back seat before late-night driving, and if you attend a party where someone is wearing a black hooded mask – RUN!