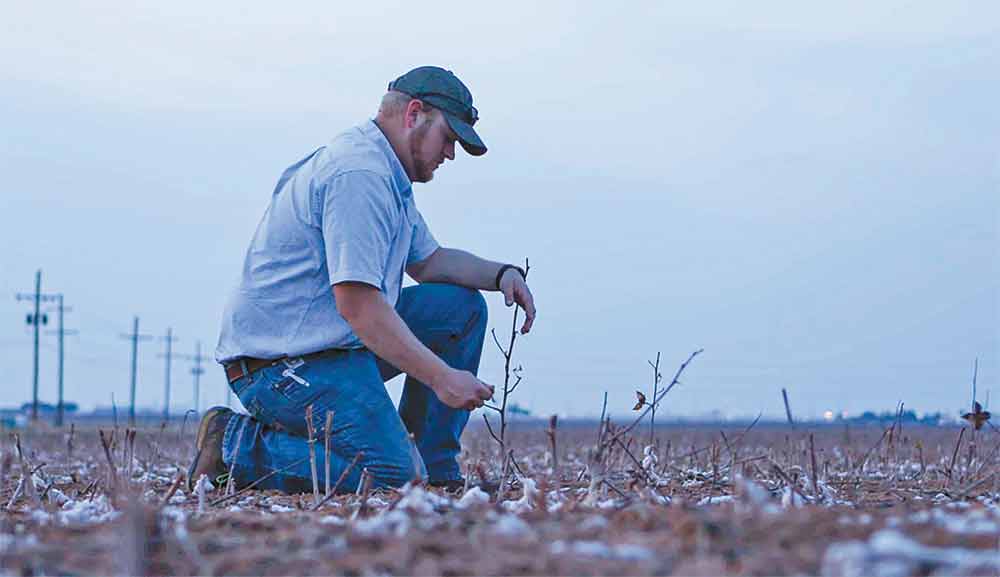 For years, Texas A&M AgriLife Extension Service experts have been instrumental in efforts to increase awareness of mental health challenges within the agricultural community.

Most recently, two of these AgriLife Extension experts collaborated with the Southwest Center for Agricultural Health, Injury Prevention and Education, also known as the Southwest Ag Center, to help produce a testimonial video relating to a farmer’s personal experience with suicide.

“The purpose of the video was to raise awareness about the unique stressors faced by those working in agriculture and to encourage those who may be struggling to speak up,” said Miquela Smith, Lubbock, an AgriLife Extension program specialist for the agency’s Disaster and Assessment Recovery Unit. “This was done by sharing the moving and very personal experience of one farmer’s and farming family’s experience with suicide.”

Smith and Tiffany Lashmet, J.D., AgriLife Extension agriculture law specialist in the Department of Agricultural Economics, based in Amarillo, provided their expertise for video content and production in addition to helping select the story featured in the video.

The approximately 12-minute-long video, “Farmer Mental Health with Grant Heinrich,” is the fourth episode of the Home Safe Home series produced by the Southwest Ag Center, which shows farm families how to “protect their legacy” through health and safety.

The video tells the personal experience of Grant Heinrich, a graduate of West Texas A&M University and location manager for Pro-Agri Spraying Inc. in Slaton, who was not long ago confronted by the specter of suicide after previously losing an uncle and two cousins to that same fate.

“The video not only looks at the stressors related to a life in agriculture, it also addresses the mindset of a farmer or rancher and how such qualities as independence and self-reliance can prevent them from seeking professional help in times of personal crisis,” Smith said.

Smith and Lashmet said they chose Heinrich to participate in the video not only because he and his family had been deeply affected by suicide, but also because he was “genuine and candid about his experiences” and told them he would “do whatever was necessary to help prevent other families from losing a loved one to suicide.”

Additionally, September is Suicide Prevention Awareness Month and the two AgriLife Extension specialists said they hoped the timing of the video, which will be released Sept. 23, will serve to help increase public awareness of suicide among those in the agricultural community.

Both also said the topic is vitally important and is in keeping with the AgriLife Extension mission of improving the lives of Texans, noting the agency will continue to address the issues of mental health and suicide prevention.

The video ends by promoting the Suicide and Crisis Lifeline 988. It also encourages farm and ranch families and workers to call or text the AgriStress Helpline for Texas at 833-897-2474 to speak with professionals knowledgeable about challenges and stresses of a life in agriculture.

Texas Department of Agriculture made it possible for AgriLife Extension and the Southwest Ag Center to work together toward creating the video, which is part of the center’s larger Seasons Change|You Remain awareness campaign.

Research has found that those working in agriculture experience higher rates of depression, substance use and completed suicide compared to those working in other occupations.  Additionally, data from the Centers for Disease Control and Prevention shows farmer suicide has increased 40% in the last two decades.

Isolation, access to and cost of professional treatment and the stigma associated with asking for help remain barriers to those in agricultural and rural communities seeking the mental health care they need.

“Those involved in agriculture and agriculture-related pursuits often face high levels of stress because so many of the factors affecting their lives and livelihoods are beyond their control,” Lashmet said. “Much of this stress comes from uncertainty about things out of the individual’s control, such as the weather and negative changes in market conditions. Other contributing factors may include things like isolation and lack of resources.”

She said this lack of control over one’s life and livelihood can lead to chronic stress, which can, in turn, lead to problems with a person’s mental health.

“If someone is unable to deal with such stress, it often leads to a negative mental state and possibly to thoughts of suicide,” she said.

Lashmet also noted that finding help with one’s mental health can be even more difficult for people who live in rural or agricultural communities as they are often isolated and distant from mental health resources or services.

“There may also be challenges to finding resources and help online, as there is often limited or unreliable internet service in many rural areas,” she noted.

AgriLife Extension has additional resources and personnel for the purpose of helping promote mental health and suicide awareness. These include:

—Podcast episodes on mental health and agriculture on Lashmet’s Ag Law in the Field Podcast.

—The free publication “Suicide Prevention in Farmers and Ranchers”  on the Texas AgrAbility website. The Texas AgrAbility project is part of AgriLife Extension and provides services to individuals with disabilities, chronic health conditions and functional limitations to start or stay engaged in production agriculture.

—The “How You Can Educate Yourself and Others During National Suicide Prevention Month” posting on the Texas AgrAbility website.

As part of a new grant, the Texas AgrAbility program of AgriLife Extension has partnered with AgriSafe Network, which has a variety of resources, courses and trainings for service providers and farmers and ranchers, including the AgriStress Helpline – AgriSafe Network. AgriSafe also has partnered with a few states/state agencies including the Texas Department of Agriculture to create a 24/7 mental health crisis helpline for farmers and ranchers.  n