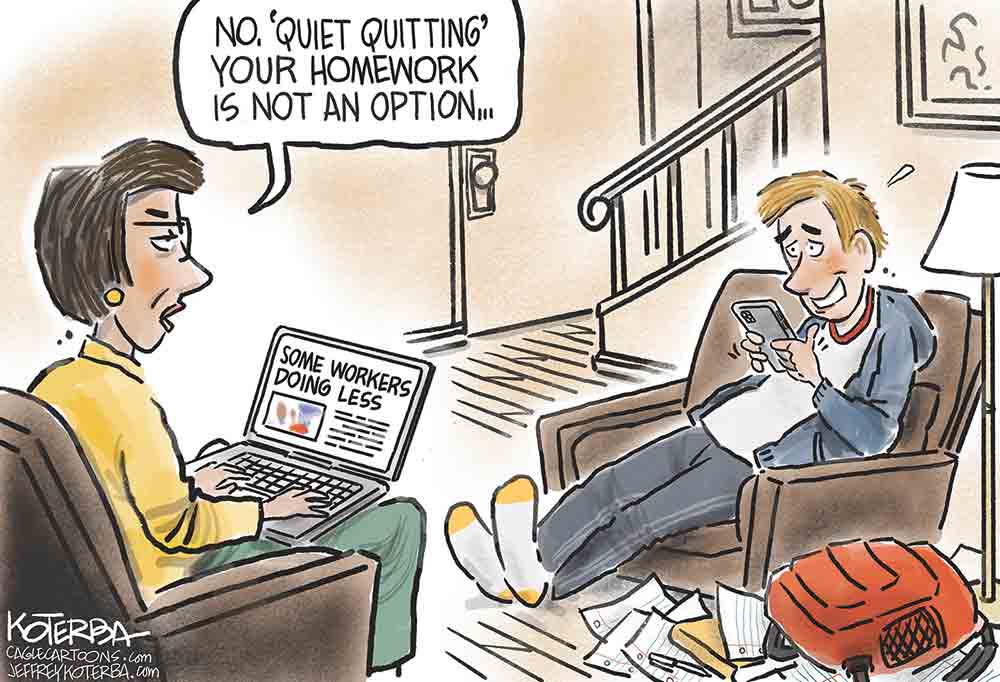 Have you heard of the “quiet quitting” trend that is being breathlessly reported on social media?

Quiet quitting refers to doing the minimum requirements of one’s job and putting in no more time, effort or enthusiasm than absolutely necessary.

Quiet quitters continue to draw a paycheck, but they have finally seen the folly of arriving early, staying late, attending non-mandatory meetings and the like. (“This is an accounting firm! How come I never questioned why there are barges to tote and bales to lift???”)

Many quiet quitters had an epiphany because of author Dan (“The Da Vinci Code”) Brown. Brown claims that the unredacted version of the Ten Commandments includes the edict “Thou shalt not covet the coveted Employee of the Month award. Verily, it hath less value than diddly-squat.”

I could’ve sworn I’ve seen my share of slackers, bums and goof-offs throughout my 40-plus-years working career; but social media treats this like something unprecedented. (“Up next: teenagers act surly, cats cough up hairballs and carbonated beverages spew after being shaken!”)

A 2022 Gallup survey suggests that about half the U.S. workforce consists of quiet quitters! When pushed for details, one pollster acknowledged, “Yeah, I pretty much engaged with 1,000-ISH respondents, and I think I left the raw data on a Post-it Note for the analysts. Like Alan Jackson said, it’s 50 percent SOMEWHERE.”

Although skeptics say worker dissatisfaction levels haven’t really changed that much in the past 20 years, I do hear anecdotal evidence of fewer disgruntled employees slamming the boss’s door on their way out of the company. It’s like we have shifted to semi-gruntled employees. But they cause trouble even for the old-style ex-employees. (“Okay, I’m back to shoot up the place, you wage slaves! CLICK CLICK Darn! This pistol was assembled by a quiet quitter!”)

There are still employees whose GPS coordinates are “halfway up the boss’s sphincter,” but now we have faux-getters instead of go-getters. Gone are the glory days of self-starters, eager beavers and the Puritan work ethic. (Granted, some companies still have Brad in HR who wears a Pilgrim hat and gushes, “Hey, I can work a second shift – off the clock – and throw rotten cabbages at rule-breakers in the pillory. Please? Please?”)

Should managers respond by cracking down or easing up? Sometimes managers need to ask, “Am I the problem?” This is especially true of the bosses who cheerlead, “Let’s get out there and go the extra mile for the customer – and afterwards, you can give me the usual foot rub.”

Many of my readers are retirees, but the quiet quitting trend has expanded to them. Diners are merely carrying a clipboard around instead of getting seconds from the Early Bird buffet. Homeowners are yelling, “Hey, you kids get off my – ah, let the ‘no trespassing’ sign take care of it.”