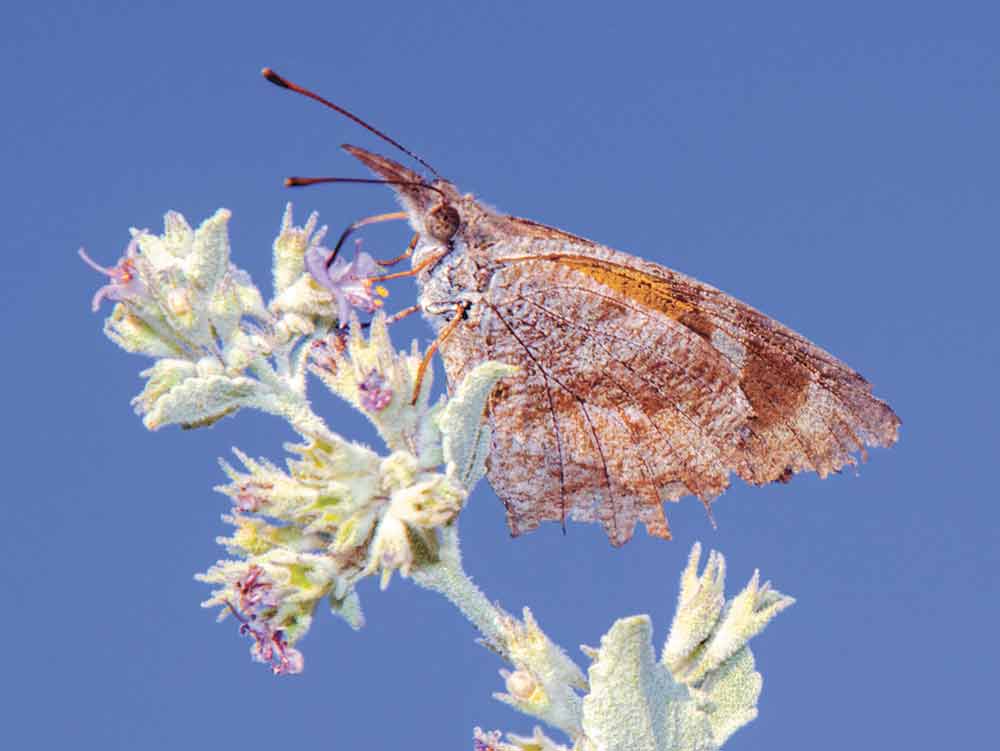 The American snout butterfly emergence this year is expected to be smaller than in previous years. Texas A&M AgriLife photo

“Large numbers of snouts have been spotted throughout the Central Texas corridor, the Hill Country and Austin,” Keck said. “But this emergence will most likely be smaller than those we have seen in past years.”

Snouts do not have a directional migration per se but instead emerge in masses and appear to move together in a generally northward direction.

“They are simply flying to look for food and a place to mate and lay eggs,” Keck said.

Keck said this year’s emergence was likely initiated by changes in weather, an increase in moisture and other environmental cues.

“We see this every year, but some years it is more noticeable than others,” she said. “Only time will tell how long this emergence will be. It could be just a few days, or it could be longer. Some years these emergences can last for weeks. In other years, they may only be hours long.”

Keck said while the butterflies “have a face only an entomologist could love” and cause grief to drivers who have to scrub them off their windshields, grills and radiators, they also play a positive role in the ecosystem.

“Like bees, butterflies are good pollinators and provide a service to both agriculture and the homeowner through plant pollination,” she said.

Keck said the snout gets its name from the elongated mouthparts called palps extending from its head. The American snout butterfly is brown, and the upper side of its wings are a dull orange, and the wings have a distinctive, squared-off, hook-like tip.

The primary host for the American snout is the spiny hackberry, but it also feeds on other hackberry species.

“Snouts can defoliate these trees, but the trees typically grow leaves back quickly so there is no permanent damage,” Keck said. “These plants are also mainly found in natural areas and would not be a plant in a home landscape, so damage is rarely even seen.”

While snout butterflies move in large masses, unlike the monarch butterfly they don’t have any particular destination.

“In past years, most notably in 2006 and 2020, dispersal migrations of the American snout through southern and central parts of the state have been thick enough to obscure the sky.” she said. “In some years, there will be two generations of snouts migrate before the fall is over.”