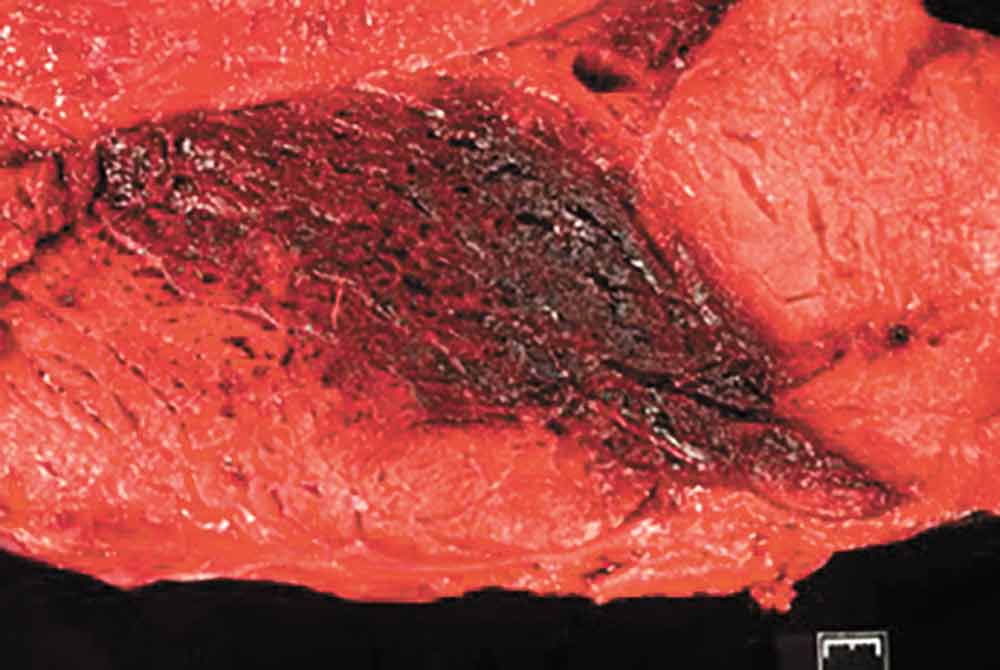 Blackleg is an infectious, non-contagious disease caused by Clostridium chauvoei.

It was a phone call from a cattleman in another county. He had two calves die in a couple of days. There seemed to be no indication in the days leading up that there was any problem.  He was asking about poisonous plants or moldy feed or anything that might be the cause. I asked what his veterinarian thought, because calling the local animal health expert should have been the very first action he should have taken. But he didn’t have a working relationship with any local veterinarian as “he tends to charge.” I strongly suggested he reach out to one for a necropsy and for a qualified diagnosis on the issue. Yes, there will be a cost, but it will pale in comparison to losing cattle. The following day, a fellow county agent and I were visiting, and he stated that there had been at least two calves lost on two different locations. Their local vet had diagnosed the death to blackleg.

Blackleg is an infectious, non-contagious disease caused by Clostridium chauvoei. In fact, there are several other common diseases in the Clostridium family, including Tetanus, Malignant Edema, and Botulism. Blackleg infection occurs when animals ingest bacterial spores while grazing. These bacterial spores penetrate the intestine and are disseminated via the bloodstream to the skeletal muscle, where the spores remain dormant. Following an event that causes low oxygen conditions (i.e., bruising or damage to the muscle) in infected tissue, the spores germinate, multiply and produce toxin that results in muscle necrosis and hemorrhage.

Livestock affected by blackleg are usually high-performing animals between six months and two years of age. It seems very confusing to stockmen as those primarily affected are cattle under two years of age and, annoyingly, is usually seen in the better doing calves. The cause of death in affected cattle is usually acute toxemia. The course of the disease is relatively short, often between 12-48 hours and clinical signs are often absent. However, animals may exhibit signs of lameness, tachycardia, fever, anorexia, rumen stasis and lethargy. Blackleg is primarily a disease of pastured cattle with most of the cases occurring during the summer months.

Back in 2017, the Texas A&M Veterinary Medical Diagnostic Laboratory (TVMDL) diagnosed a significantly increased number of blackleg cases. Although a cause for the increased incidence of cases has not been conclusively determined, a possible explanation is the environmental changes that resulted from the unusual weather conditions experienced during 2017. Specifically, it is speculated that the extreme amounts of rain and flooding associated with Hurricane Harvey and the subsequent dry conditions worked to stir up the soil leading to exposure of deeply hidden bacterial spores. Thinking about our recent weather patterns, the affected calves were in areas that had been in a drought condition, which finally received a good amount of rain, and then went back to extremely dry conditions. The affected animals presented to TVMDL for necropsy ranged in age from four months to up to one year of age.

The gross lesions included variably sized areas of skeletal muscle that was dark red and contained gas bubbles (scientifically referred to as ‘necrotizing myositis’). The affected tissue typically has the faint to pervasive odor of rancid butter. The diagnosis was clearly blackleg.

In the field, symptoms first noted are those of lameness and depression. A swelling caused by gas bubbles, often can be felt under the skin as a crackling sensation. A high temperature will also be present. Occasionally, as was noted by the producer who called me, sudden death occurs with no symptoms observed. Upon a postmortem examination, the infected area is composed of black, dead (necrotic) muscle which is pocked with gas bubbles and is usually found in the heavier more active muscle masses of the animal. As noted earlier, prompt postmortem examinations and tissue collection for laboratory testing are essential for an accurate diagnosis.

The chances for survival are poor unless symptoms are discovered early in the disease. Large doses of penicillin may save the life of the animal if administered early. It is heartbreaking that prevention is readily accomplished, using Blackleg (or Clostridium) vaccines. Over the years, these have proven very effective. Vaccination at less than four months of age will not produce a lasting immunity. Calves vaccinated at less than four months should be revaccinated at five to six months. Cow-calf operators should work closely with their local veterinarian in evaluating the prevalence of these agents in the area. The old 7-Way vaccine is still relevant, but there are new vaccines (up to a 9-Way) that your vet will likely suggest.

Bottom line, work with your local veterinarian. Ask other beef produces near you who they use. There is a whole host of disease issues out there and your local livestock veterinarian will pay for themselves many times over if you do the preventative measures they suggest.