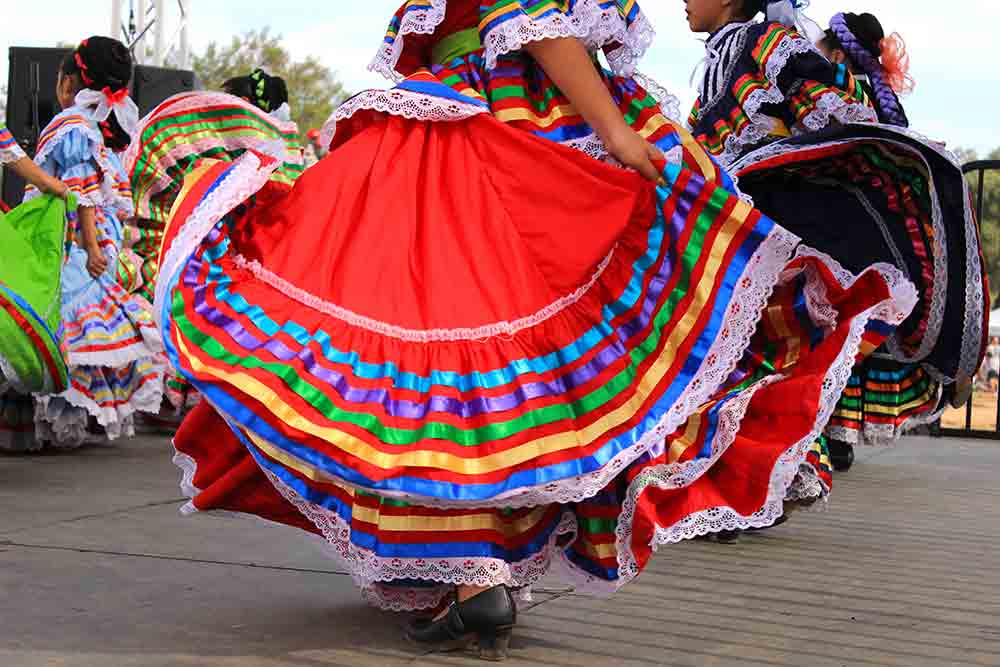 Every country has its traditional dances, which the immigrants who settled here brought with them. The Irish have their step-dancing, the Scotts their Highland dances, jigs and reels, the French their can-can and valse musette. But no one is more widely known than the Hispanic and Latinos for their energetic and sometimes passionate dance moves.

As we continue our celebration of Hispanic Heritage Month, here are a few traditionally Hispanic dances that we enjoy today.

One of the most recognizable Hispanic dances is the “baile folklórico,” or folkloric dance. Highly choreographed with ballet movements like pointed toes and exaggerated movement, the dances are most often associated with special occasions and many times accompanied by mariachi. Although the dances differ from region to region in Mexico, they are characterized by a basic set of steps called “zapateados,” which involve percussive heel-stomping.

The dresses worn by the dancers represent the different regions in Mexico. Women from Jalisco typically wear flamboyantly-colored ruffled skirts, heavy clog-like heels or cowboy boots, and ornate hair pieces. In contrast, dancers from Veracruz wear white dresses full of lace, white shoes, and a small apron with a bandana that hangs off the side of the dress. The men dress in Spanish charro suits and large sombrero hats, or white guayabera pants, white shirts, red fabric belts, and straw hats, depending on the region they represent.

The Flamenco is another highly recognizable dance, performed as a solo and characterized by hand clapping, percussive footwork, and intricate hand, arm, and body movements. The dance comes from southern Spain, typically associated with the Roma or gypsies. A singer and a guitar player usually accompany the Flamenco. Although there’s no single Flamenco dance, the dancers must follow a strict framework of rhythmic patterns. Sometimes dancers use castanets for clicking or folding fans for visual impact. Fans of the dance say that the greatest joy of watching the dance is watching the expressions and emotions of the dancer, which can frequently change during a single performance.

Cumbia folkloric rhythm and dance found its roots in Columbia in the 1800s as a courtship dance. Although widely described as “Salsa,” Cumbia music is considered the  “mother of Latin music,” predating other types of Latin music. Cumbia music became hugely famous when Selena y Los Dinos brought a youthful rhythm to the genre, and its popularity increased after Selena’s murder in 1995. These days, Cumbia is being used as an alternative to Salsa music, and many dancers dance Salsa to Cumbia music.

The Salsa dance is associated with the music genre of the same name, first popularized in the 1960s in New York City. The name is a sort of umbrella that encompasses different styles of dance, like the mambo, Pachanga, and rumba, as well as American dances such as swing and tap.

Jimmy Pacheco, founder and co-owner of the prominent Latin music label Fania Records, coined the name ‘salsa.’ “When I was rehearsing the band,” Pacheco recalled, “I saw that we had Dominicans, Cubans, Puerto Ricans, and two Jewish fellows. When you make a sauce, you have different ingredients. And when I saw the band and that singer, I thought, ‘This is what we got. We got salsa.’”

The Tango is a social dance that developed in the 1880s along the Rio de Plata, the natural border between Uruguay and Argentina. During its infant stage, the tango was frequently practiced in brothels and port bars because of its perceived sexual overtones. Ballroom tango originated in working-class Buenos Aires and spread quickly throughout Europe in the 1900s, then moved to the US, where it began gaining popularity in New York. In recent years, films such as Scent of a Woman, Take the Lead, Mr. & Mrs. Smith, True Lies, and Frida showcased the dance and increased its popularity in American culture.

Bachata is a Latin American music genre that originated in the Dominican Republic in the first half of the 20th century with African, European, and Indigenous musical elements. The dance style of Bachata became popular in the 1960s but took a dive in the 70s when Bachata music and dances were barred from society venues and relegated to bars and brothels in the country’s poorest neighborhoods. During the 80s, its popularity rose, spurred on by radio airplay and television. In 1996, the Bachata group, Aventura, broke into the mainstream music scene. The band completely sold out the Madison Square Garden in September 2007, and in 2009, Aventura was the first Bachata act to ever perform at the White House.

There are so many more dances that have Latin origins – the Merengue, Mambo, Kizomba, Rumba, Cha-Cha-Cha, Paso Doble, Conga… the list goes on.

Next time you watch “Dancing with the Stars,” enjoy that theatrical dance scene, or your fiancé or spouse asks you to learn how to Tango or Salsa for your wedding reception or anniversary, remember how the Hispanic community has contributed to today’s dance culture.