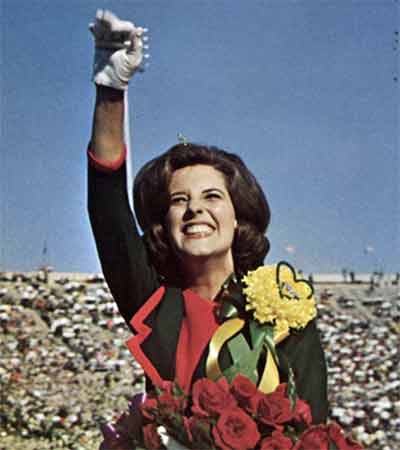 Baylor Homecoming Queen, Ann Davis, 1964What do you think of when you hear the word Homecoming? Parades. Pep rallies. Bonfires. Dances. Football. If you are from Texas, one crucial word that might come to mind is “mums.” To non-Texans, the concept of a “homecoming mum” is probably as foreign as our Southern twang, but to those born and raised here, the mum is a tradition that dates back as far as most of us can remember.

Everything has a beginning, and football homecoming celebrations are no exception. It’s widely accepted that the University of Missouri held the first homecoming game back in 1911 when the school invited its alums to return to campus to join in with current students to create a sense of anticipation for their rival game. The university scheduled pep rallies, spirit days, bonfires, and the historic ‘homecoming dance.’ Of course, it was a chance for couples to publicly proclaim their status, by the guy giving his best girl a corsage to commemorate the occasion. In season during the fall months, the chrysanthemum became the flower of choice for corsages, and so the homecoming mum was invented.

It took a little over twenty years for the mum to make its way to the great state of Texas. The first fabled “mum sighting” was said to have been a Baylor University (Go Bears) homecoming game and consisted of a chrysanthemum tied with a few green and gold ribbons to form a corsage. This tradition remained for decades, until the 70s when the homecoming mum morphed into more than just a simple arrangement. Pipe-cleaner initials were attached to the glitter-sprinkled flower, and on its streaming ribbons were tied tiny plastic footballs, cowbells, and the wearer’s name and graduation year spelled out in shimmering letters. It became a matter of bragging rights as to who had the fanciest mum. And, of course, the more your homecoming date “liked you,” the larger and more fanciful your homecoming corsage became.

It’s no wonder that by the time the 90s rolled around, the homecoming mum had become a contest to see who wore the biggest and most elaborate corsage. The massive creations were tricked out with feather boas, stuffed animal mascots, LED lights, and endless “spirit emblazoned” decorations. Ribbons extended from the shoulder to the ankle and sometimes trailed like a bridal train behind the mum’s wearer. And forget pinning the mum on your date’s dress with a straight pin as they did in the old days. These mums were so heavy they required shoulder straps and covered so much of the wearer’s torso that they almost looked like prom dresses.

Someone once said, “Tradition is only as absurd as your distance from it.” So maybe the elaborate homecoming mums seem ridiculous from an outsider’s perspective. But as photographer Nancy Newberry, who produces portraits of teenaged Texas girls wearing elaborate mums, pointed out, “They are ritually worn and subsequently immortalized, tacked to bedroom walls as trophies. At a time when many American high schoolers seem purposefully disengaged from the world around them, the Mum constitutes both a unique act of cultural immersion and a specific brand of folk art.”

Folk art? When considered in that light, their insane cost and elaborate creativity may be more palatable. At least that’s something moms, dads, and significant others can tell themselves as they pull out their wallets (and, in some cases, credit cards) and splurge on that epic and somewhat sacred purchase of the homecoming mum.