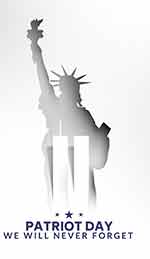 On September 11, 2001, militants associated with the Islamic extremists, al Qaeda, hijacked four airplanes and carried out suicide attacks against primary targets in the United States. Two of the planes collided with the twin towers of the Word Trade Center in New York City. A third plane attacked the Pentagon,  and the fourth plane, heading towards another key target, was redirected by the bravery of several passengers to crash in a field in Shanksville, Pennsylvania. It’s estimated that almost 3,000 people were killed during the attacks, which triggered U.S. initiatives to combat terrorism.

Several weeks later, country music artist Alan Jackson debuted the poignant song that asked the question: “Where were you when the world stopped turnin’ that September day?” Two decades later, most people who were old enough to remember the events that occurred on September 11, 2001, know exactly where they were.

That day and the days that followed were filled with visions of horror and heroes. Images of the burning towers -  the smoke - the wreckage – the heroes – the fallen - are forever etched in our memories. Hundreds of stories emerged about those who sacrificed their time and, for some, their lives to help rescue the injured, recover the deceased, and remove the ravages of the destruction. All while trying to make sense of the horrific incident that changed not only the United States but the world.

But more importantly, it was a time when Americans put aside their differences and, for a brief period of time, forgot about their self-interests and their personal agendas and joined together to stand united against a common enemy. People showed more compassion for each other. They were a little less critical of one another. They spent a little more time with their loved ones. Valued friendships a little more. For a while, we were all reminded how our lives could change on a dime. How precious life is. And how quickly it can be taken away.

On Saturday, September 10, the City of Crockett will hold a ceremony to commemorate the twenty-first anniversary of 9/11. The gathering will take place from 8:30–10:00 a.m. in the park across from City Hall.

On Sunday, September 11, please take a moment to remember those who perished in the 9/11 attack, the first responders and civilians who gave their lives or lost loved ones in the wake of the tragedy, and those who fought to protect us by taking down the enemies that committed the world-changing attack.