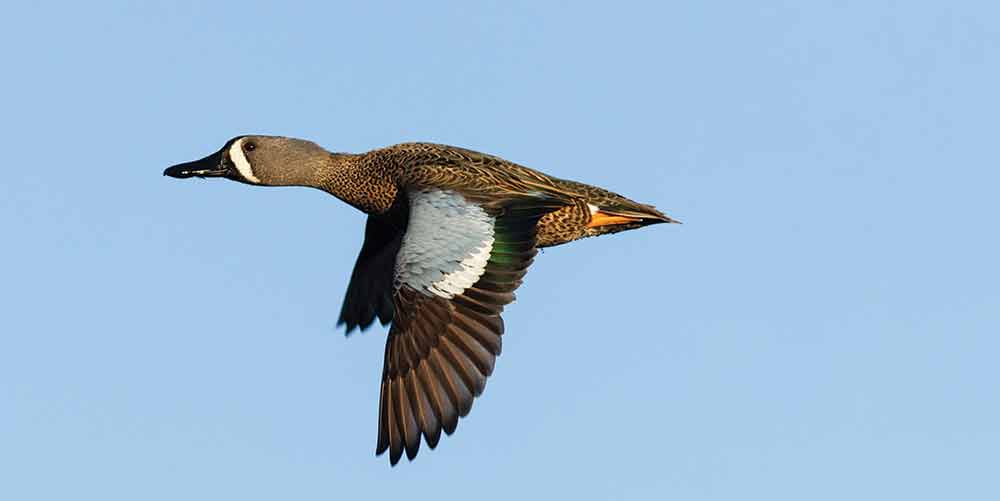 North America is home to three species of ducks we call teal. This includes blue winged teal (Spatula discors), green winged teal (Anas crecca), and cinnamon teal (Spatula cyanoptera). All three species can be found in Texas. Teal are among the smallest ducks found in North America and are very agile and fast fliers. Teal are classified as a dabbling duck, which means they prefer shallow water, typically less than 12 inches, where they feed on vegetation and invertebrates by tipping headfirst into the water with their tail in the air. Teal are known to not prefer cold weather and are the first waterfowl to migrate south with some individuals arriving in Texas as early as late August.  A weak front that may only change the wind from the North can be enough to bring teal pouring into Texas overnight from as far away as Arctic. Because of their small size and fast speed they can be very challenging to hunt and many waterfowl hunters seek to harvest all three species to complete the teal trifecta.

Blue winged teal are also named for their wings that contain a broad patch of blue above a patch of white and then green feathers. Blue winged teal nest and spend the summer in some of the same areas as green winged teal. However, they do not nest in the artic and nest further south with some individuals nesting as far south as Texas. Blue winged teal can be found throughout the southern half of Texas during winter, with the highest numbers being along the coast, but most spend the winter further south. In fact, blue winged teal are considered a long-distance migrant with individuals flying as far south as South America and even reaching northern parts of Brazil. A blue winged teal was banded in Alberta and one month later it was harvested by a hunter in Venezuela. For this reason, they are the first duck species to leave the breeding grounds in the fall and usually one of the last to return in the spring.

Drake cinnamon teal are known for their striking colors that shimmer with rich ruddy plumage. Cinnamon teal drake in full plumage are one of the most sought-after trophies in waterfowl hunting. Cinnamon teal are unique from other dabbling duck species in the fact that they do not utilize the central prairie region of the continent for nesting and instead solely nest in the western part of the continent from just north of the Canadian border to Mexico. Cinnamon teal are truly western birds and are rarely found east of Texas. However, some individuals do occasionally turn up along the Atlantic seaboard.  During winter they can be found from California through central Mexico to the coastal regions of Texas. The best locations to spot cinnamon teal in Texas are the southern Texas coastal marshes or the far western mountain regions. Cinnamon teal are also unique from other North American duck species that a separate population lives entirely in South American from Venezuela to the southern tip of Chile.

Teal are amazing little ducks that have striking colors and are incredibly agile flyers. During this fall and winter pick up a binocular and head to some marshlands and see if you can spot the teal trifecta.