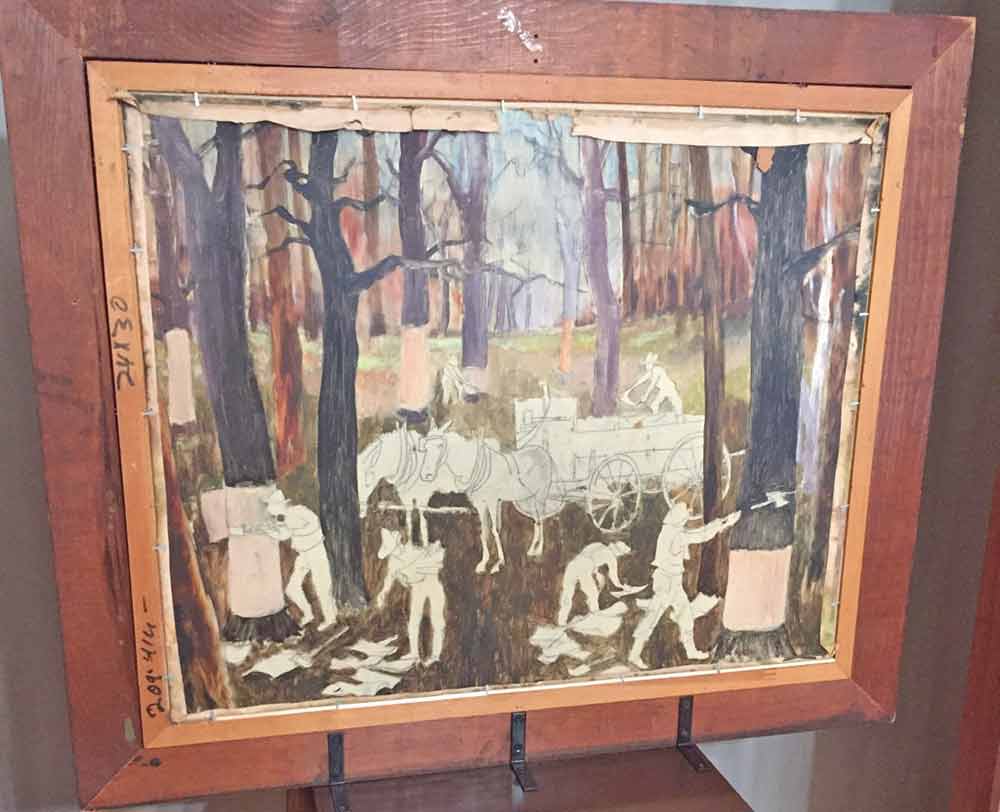 WOODVILLE – The acquisition of a painting by the late and legendary visual artist and Heritage Village founder Clyde Gray revealed a surprise; an “Easter egg,” if you will.

Annabeth Willis, a board member of the Tyler County Heritage Society and caretaker of the Clyde Gray House Museum, which is located on the Heritage Village property, recently purchased the painting from the estate sale of Annette Smith. The painting, Willis said, is a depiction of the old Seamans place in Chester, which she said is a “typical oil painting.”

It was what Willis discovered on the rear side of the painting, however, that made it a piece worthy of its own display within the Gray House.

On the backside, there is an unfinished piece of Gray’s art. It is a sketch, which Willis said is “very interesting, because it shows that he sketched his subject before painting it,” and unusual practice for him, she said.

The sketch depicts a group of woodsmen debarking trees. Willis said the bark in the depiction was likely destined for some purpose, such as making shingles or using for firewood.

The process of debarking also plays into an important aspect of regional history, more specifically, regarding modernization in timber production.

In 1952, East Texas timber magnate Arthur Temple traveled to Europe and purchased a debarking machine in Sweden. When utilized by Temple, the removed bark went into a new product – a mulch similar to peat moss.

Without the bark, the slabs that the sawmill cut away from the outside of the tree could be processed into paper chips.

Temple’s company bought a chipper and began selling the chips to the Champion International plant in Pasadena, and there was a bonus. The bark had collected so much dirt that it eventually gummed-up the saw. So, there would be no bark, and henceforth, no stoppages.

The painting is on display inside the Gray House Museum, inside of a room that is made up to resemble Gray’s office. Visitors can rotate it to see the rear part with the sketch, as it is mounted on a rotating pedestal base.