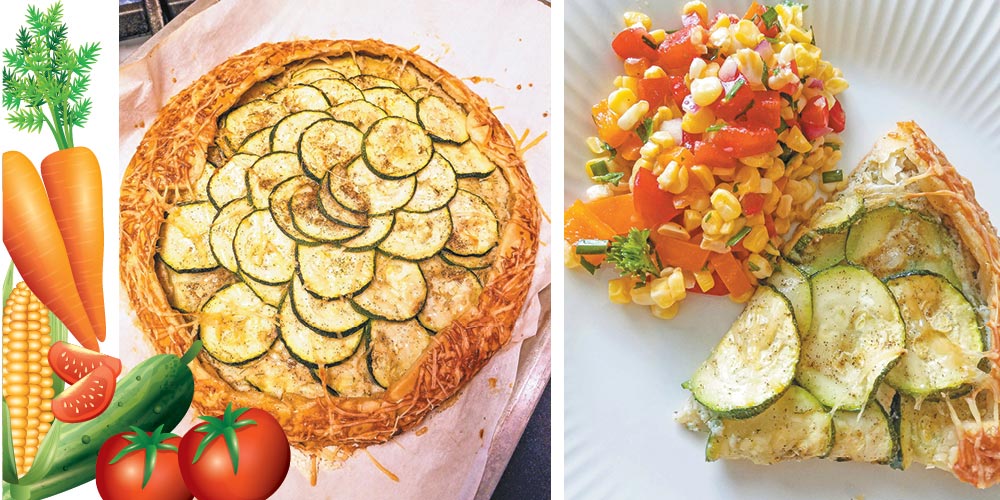 Editor’s note: Due to unexpected illness, we’re re-running this “Bite by Bite” that initially ran June 20, 2021.

After all of our recent trips to the local farmers markets we’ve found ourselves with a bounty of beautiful fresh produce. Additionally, as luck would have it, we recently received a startling amount of hearty fresh herbs from a friend who has a green thumb like no oneI’ve ever seen and blessed us with a number of items from her own big gardens.

It was time to do something with all this goodness as I didn’t want a single piece of any of it to spoil before it could be used. I decided I’d take advantage of it all and just have a number of what I like to call light summer suppers.

I recently discovered and bookmarked an article I’d found online called “30 Lazy June Dinner Ideas to Make Every Night This Month” from a website called purewow.com. If it were possible to “dog-ear” open tabs on a computer screen as one might a paperback book then I know for a fact this article would be dog-eared by now I’ve looked at it so many times. The article is filled with beautiful pictures of recipes and they all seem to spotlight summer’s bumper crop of produce.

While there are several I have my eyes on, I recently fixed one, Zucchini Ricotta Galette, and have included it here. Having a handful of produce from the grocery that had definitely seen better days, I decided to make a little salad to accompany the galette just to use it up. I didn’t use a recipe but just threw a bunch of stuff together. I’ve included it below too.

“To plant a garden is to believe in tomorrow.” — Audrey Hepburn

• Soak ears of corn, still in husks, in water, for 15-20 minutes. Then place on the rack in a preheated 350-degree oven. Roast for 25-30 minutes. Once they’ve cooled enough to handle, remove the husks and silk. Stand the ears of corn on end and carefully remove the kernels by slicing downward with a sharp knife. (I did this on a clean dish towel to catch the kernels but you can also use a bundt pan and just stick the ear of corn in the center hole and allow the bundt pan to catch and collect the kernels.)

• While the corn is roasting, chop the other veggies and place in a medium size bowl.

• In a small bowl, make the vinaigrette by mixing everything together with a wire whisk.

• Add the corn to the other veggies, add the vinaigrette and toss until all is coated.

“Last night we had three small zucchini for dinner that were grown within fifty feet of our back door. I estimate they cost somewhere in the neighborhood of $371.49 each.”— Andy Rooney

• Preheat the oven to 400°F. Line a baking sheet with parchment paper.

• On a lightly floured surface, roll out the pie crust into a 10-inch circle. Transfer it to the prepared baking sheet.

• In a medium bowl, whisk the ricotta with 1 egg and the dill, garlic and ¾ teaspoon pepper in a medium bowl. Spread the mixture evenly over the pie crust, leaving about 1 inch of the perimeter uncovered.

• In another medium bowl, toss the zucchini with the olive oil, salt and remaining pepper. Arrange the zucchini slices evenly over the ricotta. Fold the edge of the dough up and toward the center, partially covering the filling.

• In a small bowl, whisk the remaining egg with 1 tablespoon of water. Lightly brush the egg wash around the edge of the crust and sprinkle evenly with the Parmesan.

• Bake until the crust is very golden brown, 35 to 40 minutes. Let cool for 15 minutes before slicing and serving.