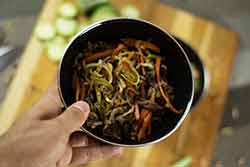 I grew up on a dairy farm in East Texas in a family of six kids.  Dad was from Louisiana and would buy rice in one-hundred-pound sacks which he stored in a clean milk can on the back porch.  We probably ate Rice and Gravy two or three times a week which was fine with Dad.  But Mom liked variety.  What other dishes could she prepare to feed a lot of mouths, vary the menu and still make use of this staple so favored by her hard-working husband?

Chop Suey first came to our family through Mom’s brother, Uncle John who was a connoisseur of sorts.  Uncle John loved to cook and was always trying new recipes.  He was a foodie before anyone knew that word!  Our family was a good place to try out his latest popular dish.  And for Mom, here was a tasty stew with lots of veggies in a sauce of exotic flavors that was served over rice!  We all thought this was Chinese Food.

History tells us that this American comfort food prepared in the Chinese style of stir fry was probably created by Chinese American immigrants sometime in the late 1800’s.  It was first seen in San Francisco where a large influx of Chinese laborers came to find work.  By the 1920’s, Chinese restaurants were opening across the country and adapted Chop Suey to the tastes of non-Chinese customers. In the 1950’s, mothers in America were making Chop Suey to feed large families.  During the 1960’s, as Americans began to look for authenticity in ethnic foods, Chop Suey became less popular.  Today in Chinese restaurants, you will not find Chop Suey on the menu.

Whether traditionally Chinese or not this month’s recipe is better than take out.  It comes together in minutes and makes use of whatever type of meat or vegetables you have on hand.  Remember, the most expensive food we buy is that which we throw away.   Think of stir fry as something different, quick to prepare that will make use of what you have.

Stir frying is an easy cooking method where foods are cooked quickly in batches over medium high heat.  A wok is the traditional pan but, a large skillet works very well.  A basic stir fry includes meat, vegetables and sauce.  All the ingredients are sliced before you cook.  Cut meat into strips across the grain to make them more tender.  Chop veggies into small or thin pieces to help them cook quickly.  Make the sauce ahead of time so that it will be ready to add without overcooking the other ingredients.  A simple sauce for Chop Suey is cornstarch dissolved in equal parts water and soy sauce. Cook the meat first over medium high heat stirring as you cook and then reserve it to a plate while you cook the veggies.  The more-dense veggies like carrots or broccoli take longer to cook.  Add them to the pan first and they will continue to cook as you stir in the other veggies.  When the veggies are near done, the meat and sauce are stirred into the pan.  After it thickens, your dish is ready to serve.

After Uncle John’s successful debut of his Chop Suey at the Scallon farm, Mom now had another meal in her repertoire to serve with rice.  And Dad was happy because for him, this was just another variation of rice and gravy.  I think I’ll cook some of that rice I have in the pantry.

1 large onion, sliced vertically and then cut into thin strips

Cook the rice according to package directions.

Heat 1 tablespoon of the oil in a large skillet or wok over medium high heat.  Lightly season the beef with salt, pepper and garlic powder and stir fry until it begins to brown.  Don’t overcook it.  Reserve to a plate.

While the meat is cooking, prepare the sauce.  In a separate mixing bowl, stir the cornstarch into the broth until dissolved.  Stir in the molasses and Worcestershire sauce until well blended.  Stir in the soy sauce.  Set aside.

Return the meat to the pot and stir in the sauce.  Stir in the bean sprouts, water chestnuts, and bamboo shoots.   Cook while stirring until thickened.  Cover, reduce heat and simmer about 5 minutes to blend flavors.  Adjust seasonings and serve over white rice.  Garnish with sliced green onions.