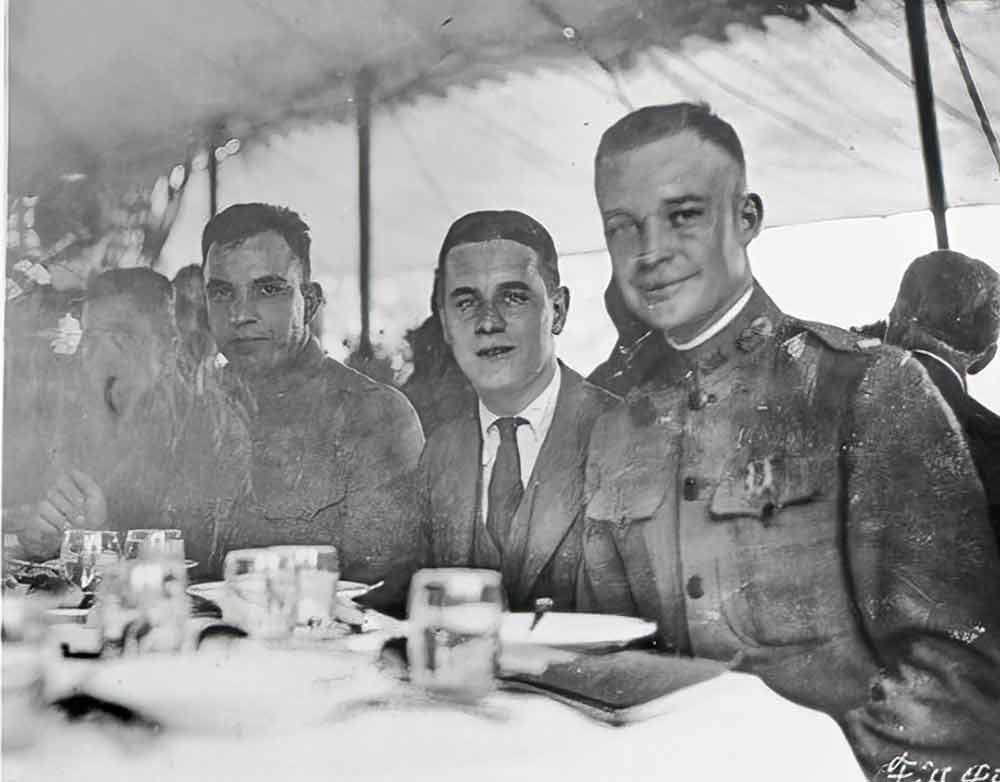 Eisenhower (right), stopping for a chicken dinner on the lawn at the Firestone Homestead Farm in Ohio, on July 13, 1919.Photo used via Creative Commons

It was the summer of 1919. Future president, Dwight Eisenhower, was a twenty-eight-year-old lieutenant stationed at Maryland’s Camp Mead – 1,500 miles away from his wife and infant son, who lived in Denver. Disappointed that he’d been kept stateside during World War I, Eisenhower was looking for a worthwhile undertaking to occupy his time.

When he heard that two tank officers were needed as volunteers from the military base to participate in a coast-to-coast military convoy to San Francisco, Eisenhower was first to sign up. It wasn’t as exciting as combat, but as Eisenhow later described the project as, “a genuine adventure.”

Because the cross-country caravan took place just months after the end of World War I, the War Department considered it as part victory lap, part publicity stunt. But the military saw the convoy as a way to test the capabilities of the Army’s Motor Transport Corps and highlight the poor state of America’s roads.

It was the morning of July 7, 1919. Following an elaborate dedication ceremony at the Zero Milestone, the point from which all highway miles to the nation’s capital are to be measured, the “motor truck train” rumbled due west out of Washington, D.C. The eighty-one vehicle convoy included ambulances, tanker trucks, field kitchens, passenger cars that carried reporters and automotive company representatives, searchlight trucks, and a five-ton trailer hauling a pontoon boat christened Mayflower II.

The caravan had only been on the road about four hours before the problems began. A kitchen trailer broke its coupling, a fan belt broke on an observation car, and another truck suffered a broken magneto before the convoy stopped in Frederick, Maryland, for the night. The troops had only covered forty-six miles in seven hours - barely over six miles per hour. More delays followed when roofs of covered bridges proved too low for the trucks, causing unexpected detours. Stripped gears, over-heated radiators, and vehicles mired in the mud added to the delays. On a bright note, a custom-designed Militor tractor truck, which cost the military $40,000, earned its worth by towing vehicle after vehicle out of roadside ditches and mud holes. It even arrived at camp one night, towing four trucks in its wake.

Once the caravan moved through Illinois, it left behind paved sections of the Lincoln Highway. A fleet of Harley-Davidson and Indian motorcycles rode as scouts ahead of the convoy to inspect road conditions, marking the route forward with painted arrows.

Two days were lost in Nebraska as the convoy encountered sand as slippery as ice, and outside North Platte, twenty-five trucks, including the Militor, slid into a roadside ditch. And it took the convoy seven hours to cross one nightmarish stretch of 200 yards of quicksand.   But that wasn’t the worst of it. Eisenhower reported that Utah’s stretch of the Lincoln Highway was “one succession of dust, ruts, pits, and holes.” Troops had to physically remove sand drifts from the road. Vehicles repeatedly got stuck in the desert where no rain had been recorded for eighteen weeks. When dozens of trucks were mired in the salt flats, the soldiers were forced to tow them by hand. The troops began to suffer from a lack of water, which had been rationed to one cup for dinner and another overnight. The commander even posted guards around the water tanker to prevent stealing until a shipment of water from the Utah Highway Commission could arrive.

It wasn’t all just misery, though. Band concerts, street dances, banquets, and endless speeches by local politicians greeted the two-mile-long convoy as it rolled across the country. And once they arrived in California, the convoy made it back onto paved roads, hitting top speeds of ten miles per hour. In San Francisco, the vehicles paraded through the flag-festooned streets to the end of the Lincoln Highway - six days behind schedule.

The caravan had navigated 3,242 miles through eleven states in sixty-two days, at an average of 52 miles per day.

In his book, At Ease: Stories I Tell to Friends, Eisenhower wrote, “To those who have known only concrete and macadam highways of gentle grades and engineered curves, such a trip might seem humdrum. In those days, we were not sure it could be accomplished at all. Nothing of the sort had ever been attempted.” Eisenhower lamented the lack of investment in maintaining existing roads. “I think that every officer on the convoy had recommended in his report that efforts should be made to get our people interested in producing better roads. It seems evident that a very small amount of money spent at the proper time would have kept the road in good condition.”

Later, when he was Supreme Commander of the Allied Forces in World War II, Eisenhower experienced first-hand how Nazi Germany’s high-speed autobahn helped the troops to mobilize quickly. “After seeing the autobahns of modern Germany and knowing the asset those highways were to the Germans, I decided, as president, to put an emphasis on this kind of road building,” Eisenhower said that the 1919 road trip had always remained in the forefront of his mind. “The old convoy had started me thinking about good, two-lane highways, but Germany had made me see the wisdom of broader ribbons across the land.”

Because he championed its creation, in 1990, the American Interstate Highway System was officially named the Dwight D. Eisenhower National System of Interstate and Defense Highways in his honor.

As of 2020, about one-quarter of all vehicles driven in the country used the Interstate Highway System, which is about 48,756 miles.