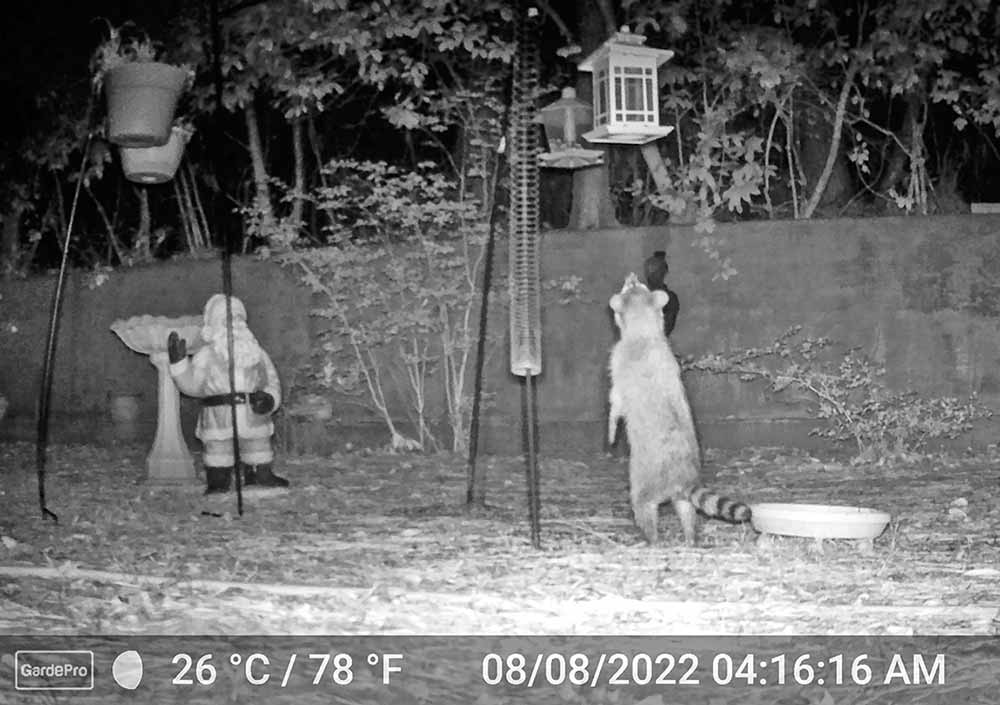 One is a raccoon wishing he could get up to the bird feeder. But, raccoons can’t jump. Courtesy photo

When the sun goes down most of us assume that the world outside stops. Unless we can see or hear it, (or in some cases smell it)  it ain’t happening!!  Surprise! Whether you live in the country or the city, there is a whole ‘nother world out there after dark. For the price of a game camera (ours cost $70) you can get a peek into that after-dark world. It is can be a fairly predictable world—until something unexpected shows up.

Our back yard is not big, but big enough for 4 birdfeeders which we tend more or less daily. It is surrounded by redtops and on one side a creek and maybe 50 yards of woods and such. Our yard is not big enough for hummingbirds but seems to be an ideal place for daytime visitors like bluejays, cardinals, sparrows, chickadees and occasional woodpeckers and squirrels.  The birds have provided our best entertainment during the pandemic, but after a while they are fun to watch but not worth taking pictures.

It’s the nightlife that is fun, so we set our camera to take pictures only from 7 pm to 7am.  If you are not a birder, you may not know that cardinals are first up in the morning and the last feeders at twilight.  As darkness falls, things change. During the day birds slop over a lot of bird seed when they eat, and some animals love those remains.  Notably raccoons. After tiring of still shots, we set our camera to 10 second videos and the entertainment value went way up.

During an average night at this time of year we get 2 raccoons that visit by 9pm and again sometime around 2 am or 4.  A cat that we think is the “watchcat” for the City Garage up the hill usually wanders through once or twice, making the raccoons scamper, but they come back. As you can imagine cats and raccoons don’t get along. Raccoons feed a long time on the seeds, and if I put some stale bread out they will feast on that. A small possum comes through once in a while but they don’t seem to be seed feeders or like stale bread. An occasional armadillo shows up looking for grubs, but they don’t like seeds or bread either.

One night I got a picture of a coyote, verified by Chris Gregory, our wildlife biologist. And one night I got a picture of mating raccoons;
Chris admitted that he had indeed never seen that before, and I don’t know anybody else who has either!!! Sometimes Chris asks if he can use a picture in his presentations, but he didn’t ask if he could use that one!!! For several nights a skunk showed up…not a welcome visitor; unthinkingly, I decided to try catching him in a live trap. When I woke up Sunday morning I looked out my bathroom window and sure enough…I had a skunk. What did I do? I called my local pest control guy, Carl: “Carl, there is a skunk in my trap.” Carl replied, “ It’s YOUR trap! I’m headed for Sunday School..” The skunk story is a whole other story, too long for this telling. Suffice it to say we escaped being sprayed!!!

When we started enjoying the nightlife we used to feed the raccoons on the deck. They would show up before dark and our grandchildren loved to watch them. One spring Mama Raccoon showed up with 6 little ones. They were so cute!! Ruth claimed they would come and tap on the windows reminding us that it was feeding time at the zoo; then a week later another Mama showed up with 5 more little ones—13 at one time. I opened the back screen door to take out some food and one of the little ones ran into the porch. With some luck we got the raccoon out and realized that feeding the raccoons  had gotten out of hand. No longer do we feed them. We let the birds do that!!!

A few nights ago, another mama showed up with 3 small ones, but the big ones scared them away. Life is tough out there in the urban wild.

So you thought game cameras were only good for checking the deer and hogs around your deer feeder? Think again. There is indeed a whole ‘nother world after dark in our backyard and I’ll bet in your back yard too. Yes, you “prime of life”  folks may not have time for all this, but if you have little kids or old people around, there is a world of fun waiting for you.

This column, De Gustibus, is supposed to be about wine. I promise that next time I’ll write some tips about white wine!!! That is, if a really interesting picture doesn’t show up some night!