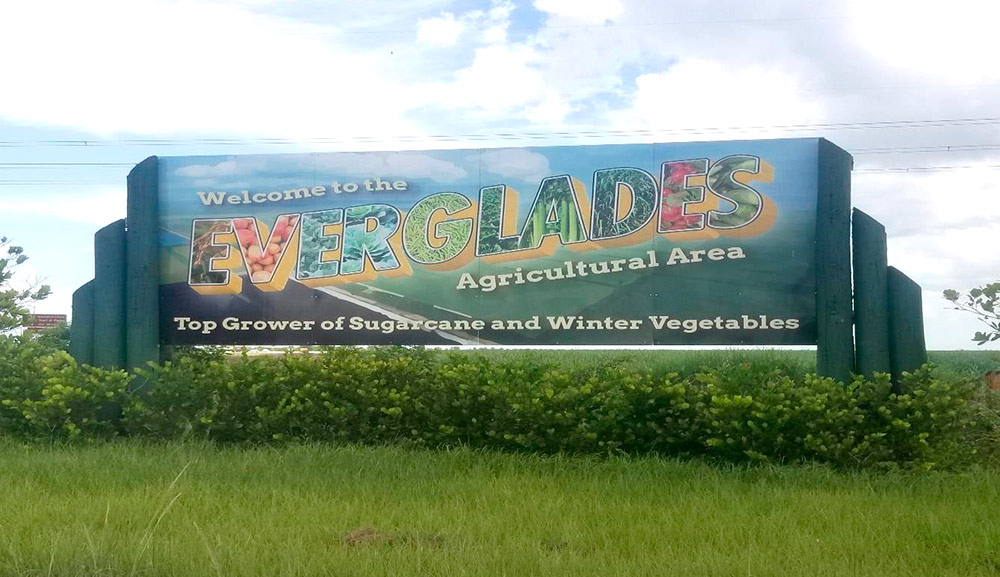 In July I had the opportunity to attend the National Association of County Agricultural Agents Annual Meeting in West Palm Beach, Fla. The week was full of professional development programs where I met and learned from other extension agents from across the country from Alaska to Florida. One of the highlights of my week was spending the day touring the Everglades Agricultural Area with the focus being on sugarcane production.

The Everglades Agricultural Area is situated in south Florida between Lake Okeechobee and the Everglades National Park. The area consists of over 1,100 square miles of some of the most highly productive farmland in the entire country. The soil is very young and high in plant material resulting in the organic matter of the soil being between 60%-70%. With such high organic soil content farmers apply little to no nitrogen fertilizer. In fact, the only fertilizer regularly applied in sugarcane fields is phosphorus. The Everglades Agricultural Area was created by Florida state government as a special district to help support landowners and the agricultural economy by conducting research and managing environmental issues such as water management and excessive phosphorus loads in the water. Palm Beach County is at the heart of the Everglades Agricultural Area and even though the county is home to 1.5 million people, including some of the richest people in the country, agriculture is still the number one industry in the county with tourism being a close second.

Sugarcane reigns as the king of crops in the Everglades Agricultural Area. When driving through the region, sugarcane fields extend as far as the eye can see. For this reason, Florida ranks number one in sugarcane production in the country followed by Louisiana and Texas. There are approximately 27 sugarcane farmers in Everglades Agricultural Area and these farmers are part of a co-op that helps harvest, ship and process cane into raw sugar. Most of the farmland is owned by two large companies called U.S. Sugar and Florida Crystals.

These companies not only own the farmland, but they are vertically integrated and own sugar mills that process the raw sugar into refined sugar, packing plants and distribution centers. While touring Florida Crystals packing plant, different packing lines had products destined for around the country including Wal-Mart Great Value, 1-ton totes for bakeries, Dominion Brand and even Whataburger individual packets.

Even though sugarcane is the main cash crop, many other crops are grown in the Everglades Agricultural Area.This includes turf grass, leafy greens, lettuce, radishes, sweet corn, celery and rice. Lettuce, leafy greens and radishes are typically grown during the wintertime and supply the entire eastern seaboard of the United States with these vegetables during the winter. If you buy lettuce in New York City in December it was grown in Florida. Sugarcane is grown in a two- to four-year cycle. Once stalks are planted by hand, sugarcane is harvested annually between October and June. The plant then regrows from the root and is harvested again the following year. Around year three, yields reduce to unprofitable levels and one of the other crops mentioned above is grown for that year. Sugarcane is then replanted and the cycle starts again.

There are many unique environmental and sustainability issues with Everglades Agricultural Area. One of the main concerns is subsidence, which is the sinking of land. Though subsidence is a natural process in south Florida, human activity has caused subsidence to increase at an alarming rate. Prior to draining of the swamp in the early 1900s, soil was not exposed to air which meant the high organic plant content in the soil would not breakdown except during dry periods. Since the swamp has been drained, the soil is now exposed to air causing the soil to breakdown and the land has sunk six feet in the last 100 years. This is important because some parts of the area have less than a foot of topsoil remaining to bedrock. To combat subsidence, fields are flooded when not in production to prevent the soil form being exposed to air. Phosphorus runoff into the Everglades National Park is an environmental issue because phosphorus increases algae growth which can cause fish kills and a host of other water quality issues. Farmers recognized the need to control phosphorus runoff from their fields, so they actively participate in programs to manage phosphorus runoff such as banding phosphorus fertilizer, soil testing and leaving vegetation barriers around edges of fields. Rodents are a major pest in sugarcane fields because they eat the cane right before harvest. A common practice is to put out rodenticide prior to harvesting. However, research conducted by the University of Florida found that placing owl boxes on edges of fields can help control rodent populations. Some farmers have embraced this practice and with the use of owl boxes no longer need to use rodenticide in their fields.

I really enjoyed the opportunity to travel to south Florida and learn about agriculture in a different state and I’m glad I’m able to share some of these experiences with you. 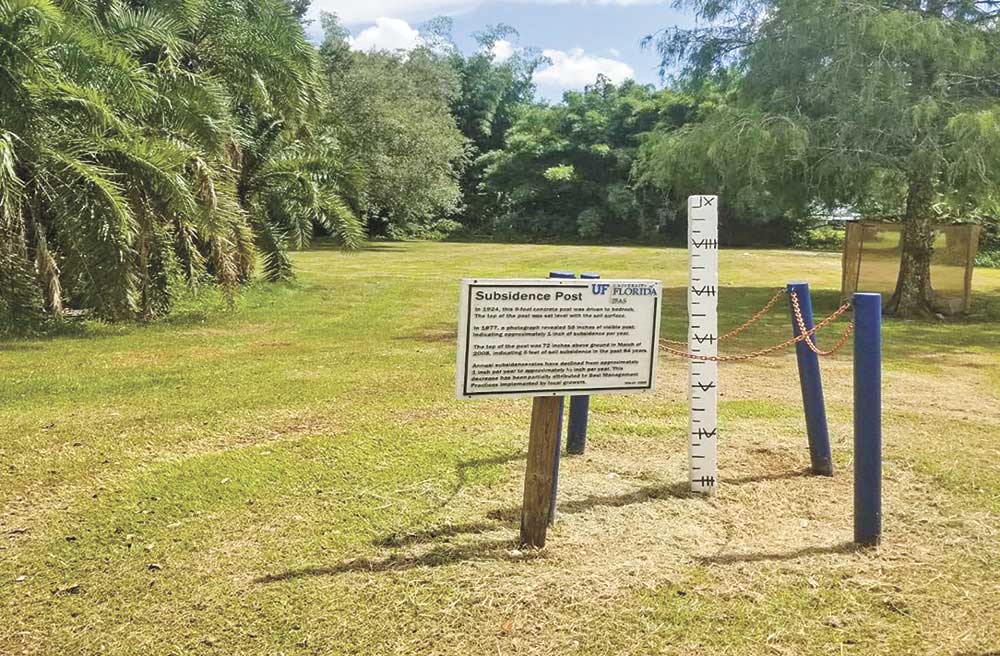 Subsidence Post at University of Florida Research Station, which has sunk over 6 feet in the last 100 years. Courtesy photos