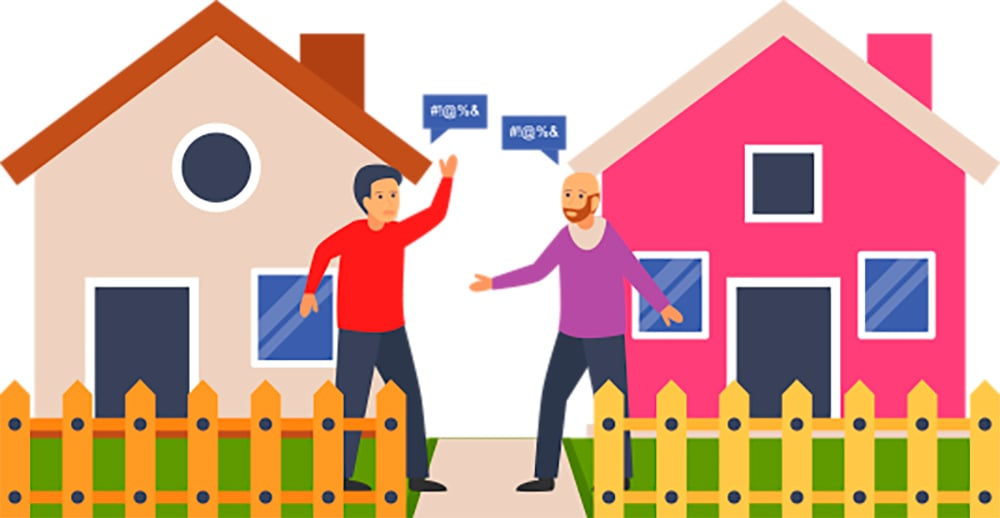 Admit it. At least once in your life, you’ve had one of those neighbors. You know the one we’re talking about. The one that doesn’t maintain their yard or has that yappy dog with the high-pitched bark that drives you nuts. Or has those cute kids that decide to play right beside your window when you’re trying to take your cherished afternoon nap. Or maybe it’s the young couple who hosts parties until 3 a.m., blasting music that shakes your walls.

Whatever the annoyance, take comfort in knowing you are not alone.

Lombardo Homes, a family-operated home construction company based out of Michigan, decided to conduct a survey to find out what percentage of homeowners had grievances with their neighbors and the top complaints. They spoke with over 1,200 people who lived in single-family homes, multi-family homes, apartments, townhomes, condos, tiny houses, and mobile homes in cities, suburbs, and rural areas. According to Lombardo, the respondents were 49% female and 49% male, with an age range of 18 to

Here are some of the highlights of the survey:

•53% said they have a noisy neighbor, most of whom, surprisingly, live in single-family homes.

•62% say they have confronted their neighbors about issues.

The top 10 most annoying “non-neighborly” behaviors are 1) noise, 2) not cleaning up after pets, 3) nosy or intrusive neighbors, 4) not parking in the correct spaces, 5) unsupervised children, 6) aggressive animals, 7) upstairs neighbors with loud footsteps, 8) the smell of cigarette smoke, 9) those who don’t maintain their yards or landscape, and 10) passive-aggressive neighbors. And although it didn’t make the top 10, overflowing garbage and its offensive odor was next in line on the list.

Since respondents listed noise as their number one complaint, Lombardo wanted to find out exactly what noises were most offensive. The number one answer was loud music, followed by adults loudly talking or shouting, loud pets, rambunctious children, noisy exterior work like construction or yard care, heavy footsteps from upstairs neighbors, loud TVs, loud sex, loud interior work like construction of remodeling, and loud instruments.

When given a choice, 70% of those with noise complaints said they would rather live next to loud-talking neighbors than those who own a loud dog. And three out of five say they’d rather live next to people who play instruments than the neighbor who loves hosting lots of parties. Does that go for the budding drummer or electric guitarist?

However, with interest rates rising and signs of the housing market cooling a bit, you might be stuck with that annoying neighbor. So is there anything, short of complaining, that you can take into your own hands to lessen the noise?

For those living in single-family homes, trees, bushes, and fences make excellent barriers to shield you against some noises while adding a bit of privacy to the area. Inside the house, some have turned to using fans or small electronics that help produce “white noise,” which can bring some relief by masking background noise. Unfortunately, there’s not much you can do in dwellings that share walls. 72% of respondents believe apartments are by far the worst place for annoying neighbors.

Count yourself lucky if you get along great with your neighbors. But of course, there is no guarantee that happiness will last if your current neighbor moves and another moves in.

To review the complete study and survey online, visit https://lombardohomes.com.