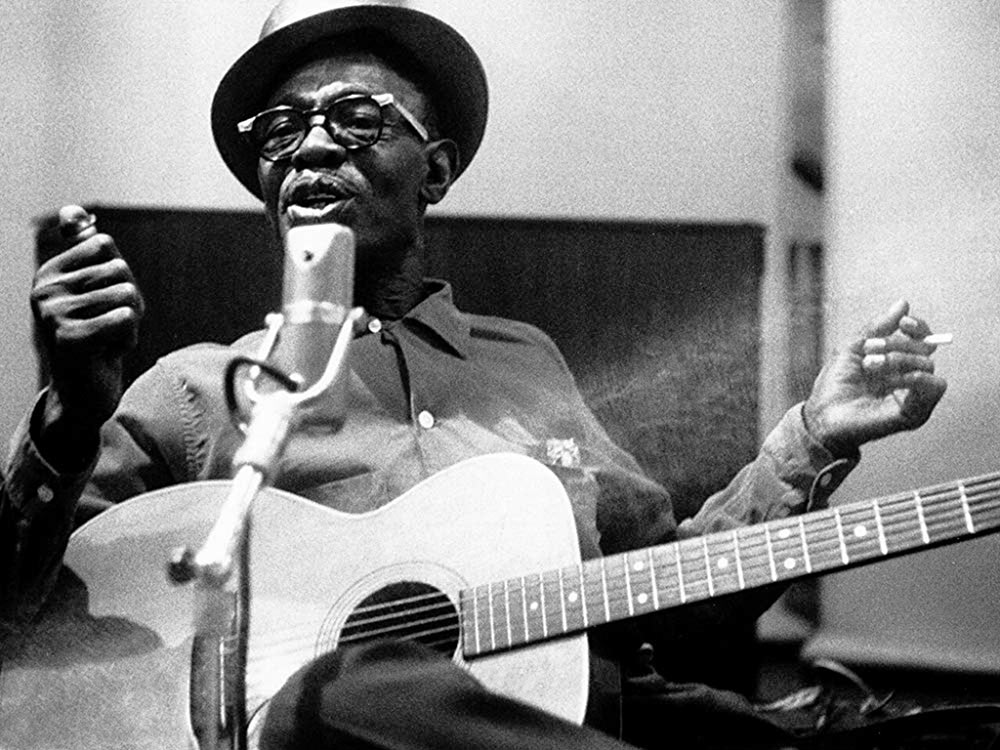 Featured on another of the downtown historical banners, created by Robin Ogg, is the iconic blues singer Sam ‘Lightnin’ Hopkins. Although Hopkins was not born in Crockett, he is tied to the town by both a bit of notoriety and his love of playing and singing the blues.

Samuel John Hopkins was born in Centerville, Texas, on March 15, 1912. When his father died in 1915, the family moved to Leona, Texas, where Hopkins grew up. Hopkins’ father had been a musician, as were his older brothers, John Henry and Joel. And while his mother encouraged Hopkins to play the organ at her home church services, the boy was more drawn to the music played by his older siblings. At age eight, Hopkins attended a church picnic in Buffalo, Texas, where he saw Blind Lemon Jefferson perform - and the rest, as they say, is history. Hopkins created his famous “cigar box guitar,” which his brother, Joel, taught him to play. By the time Hopkins was ten, he was playing alongside Jefferson, who had become a sort of mentor.

In the late 1920s, Hopkins teamed up with Texas Alexander, a cousin of his who had gained quite a reputation as a blues singer. During the week, they would work on local plantations, but on the weekends, they would play picnics and dances, and Hopkins took to jumping trains and traveling from town to town, busking wherever he could.

Historian Pipp Gillette says that Hopkins would come to Crockett and “stroll up and down Camp Street playing for tips.” It was a rough lifestyle that eventually led to Hopkins spending some time in the Houston County Prison Farm, an experience that spurred Hopkins to write several ‘prison blues’ songs. During a studio recording, he once said, “Man come to me; put me in jail in Crockett. I did pretty good and I runned off. I hit the road, Jack. They come to the Trinity, got me out of the Trinity [river]. I wore a ball and chain. Man, I can show you a scar on my leg. You see that? There? That’s from wearing that man’s outfit.”

After his release from incarceration, Hopkins rejoined Alexander and tried to break into the music scene in Houston. Initially, the attempt was unsuccessful, and Hopkins ended up working on a farm back in Centerville. It wasn’t until 1946, after the duo returned to Houston, that a representative from Aladdin Records heard them singing on Dowling Street in the city’s Third Ward and convinced them to travel to Los Angeles for a record deal. But on the day of the recording session, only Hopkins showed up. The studio paired him with pianist Wilson ‘Thunder’ Smith, and the duo was billed as ‘Thunder and Lightnin,’ branding Hopkins with the nickname that would stick with him for the rest of his career.

The first album was described as ‘downbeat solo blues.’ Hopkins went on the record for twenty different labels over the next ten years. He played Carnegie Hall with Joan Baez and went on to perform at prestigious venues like the Newport Folk Festival and tour Europe with the American Folk Blues Festival. He also appeared on a CBS TV special ‘A Pattern Of Words & Music.’ And in 1967, filmmaker Les Blank documented the Texas troubadour’s lifestyle in his acclaimed film “The Blues Accordin’ to Lightnin’ Hopkins.

By the time of his death in 1982, Lightnin’ Hopkins was probably the most recorded blues artist in history. He performed live for six decades and recorded for over 30 years. His musical style, which began in the 20s, barely altered over the next sixty years, but it served as the inspiration for artists like Jimi Hendrix, Stevie Ray Vaughan, The Red Hot Chili Peppers, and countless others.

In 2002, on the twentieth anniversary of Hopkin’s death, Pipp Gillette and his brother Guy, who has since passed, put up a statue of Lightnin’ Hopkins across the street from the only remaining structure left from the old historic black district – The Camp Street Café & Store. According to Pipp Gillette, “Since 1998, many touring musicians have played at the Camp Street Café & Store. It’s got good sound and acoustics. I always give credit to Lightnin’ Hopkins for the ambiance. It’s a place where he played, and there aren’t many of those left.”

Lightnin’ Hopkins once said, “People have learned how to strum a guitar, but they don’t have the soul. They don’t feel it from the heart. It hurts me. I’m killin’ myself to tell them how it is.”

Hopefully, that spirit of Lightnin’ Hopkins can be found in the talented musicians and singers who bring the heart and soul of their music to Crockett.