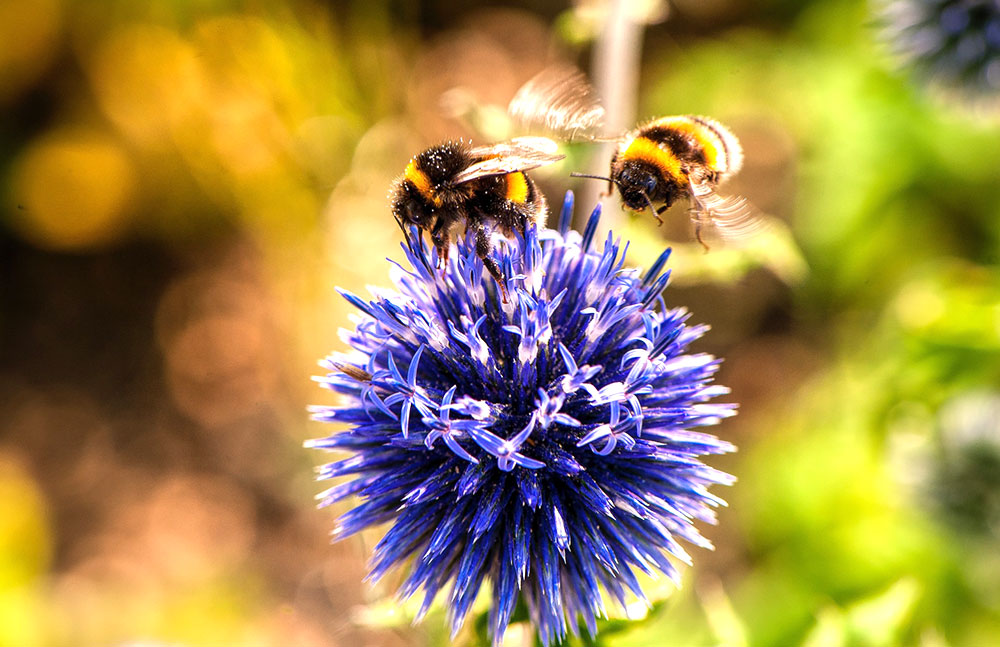 Any bee aside from a honeybee is considered a native bee, such as these bumblebees. Michael Hodgins/pexels.com photo

Two large bumblebees hover over a purple flower. The flower is a ball shape of sharp looking petals in a shade of purple.
“When people see a bee in their garden, many assume it is a honeybee when, odds are, it is actually a native bee,” said Molly Keck, AgriLife Extension integrated pest management specialist and entomologist, San Antonio.

She said, in the simplest of terms, a native bee is usually any bee except a honeybee since honeybees are not native to the Americas.

And while bees can look very similar or very different from each other, most bees have a “fuzzy” looking body, unlike wasps who are shiny and “smoother” looking.

Giving credit where credit is due

There are over 4,000 species of bees in the U.S., making them the MVP of pollinators. And a bee’s work is never done, considering that 90% of flowering plants require a pollinator.

Honeybees play a key role in agriculture, but native bees are just as important, Keck said.

“There are native bee species that are 17 times more efficient as pollinators than honeybees,” she said.

Native bees are also better at pollinating some of the most beloved backyard crops — including tomatoes, blueberries and pumpkins — making them the heroes of home gardeners everywhere.

Whereas honeybees prefer blanketed areas of the same food source, such as a field of a single crop, native bees are all about variety.

The more types of flowers, fruits and vegetables that grow in a garden, the more native bees you can expect to see.

Purple wildflowers againt a green background at the Concho Valley AgriLife garden in San Angelo. A bee rests on one flower.
“Essentially, to attract native bees, you want to have many different mini-landscapes inside your yard,” Keck said.

She said to get an example of a native bee’s ideal habitat, picture an English garden with hedgerows, pasture, plants and flowers.

Bees are drawn to flowers because of their scent as well as the shape of their flower. They also are attracted to bright colors, especially blues and violets. Red they see as dark, like brown and black, and isn’t as appealing.

“Native bees feed in ‘pockets,’ so you don’t need as much space to attract them as honeybees,” Keck said. “You’ll just need a variety of food sources for them.”

Although bees may have a harder time finding their way to a garden balcony in a large city, a pollinator garden can be a success anywhere. Having gardens in cities also provides a key nutritional resource in what could be a food desert for native bees.

Texans with yards may consider not having turf everywhere, leaving some land uncultivated and allowing some ground to stay bare. Some native bees, like the mason bee, use mud as mortar to build their homes and having mud on the ground when the weather allows is also attractive.

Around 70% of bees nest underground rather than the traditional hives many people envision and that honeybees call home.

Although all female bees can sting, most native females won’t sting unless trapped, hurt or directly threatened.

“Native bees are unlikely to sting you,” Keck said. “Honeybees are more territorial and likely to defend with a sting.”

In other words, don’t try to catch a native bee and you won’t have too much to worry about. However, if you are allergic to bees, it is smart to avoid all types, as well as wasps and other flying-insect venoms, Keck warned.

A native bee retains its stinger after a strike, whereas a honeybee sting is fatal for the bee. And male bees? Neither honey nor native has any sting at all. However, there are far more female than male bees, so it is safe to assume a bee you see does have a stinger.

Keck said it’s important for every Texan to be aware of the need to protect bee habitats, although there is no threat of extinction in our state quite yet.

“I think the amount of undeveloped land we have in Texas is part of the reason our numbers are still good,” she said. “But as urban areas expand and the sprawl increases, we could start to see the same bee population problems some other areas face.”

Whereas honeybees have been domesticated or managed for thousands of years, native bees are still independent contractors.

“Native bees do an equally important job as honeybees and for some crops like fruit, native bees are even better pollinators,” Keck said. “To create an environment for them to thrive is something every Texan can support.” 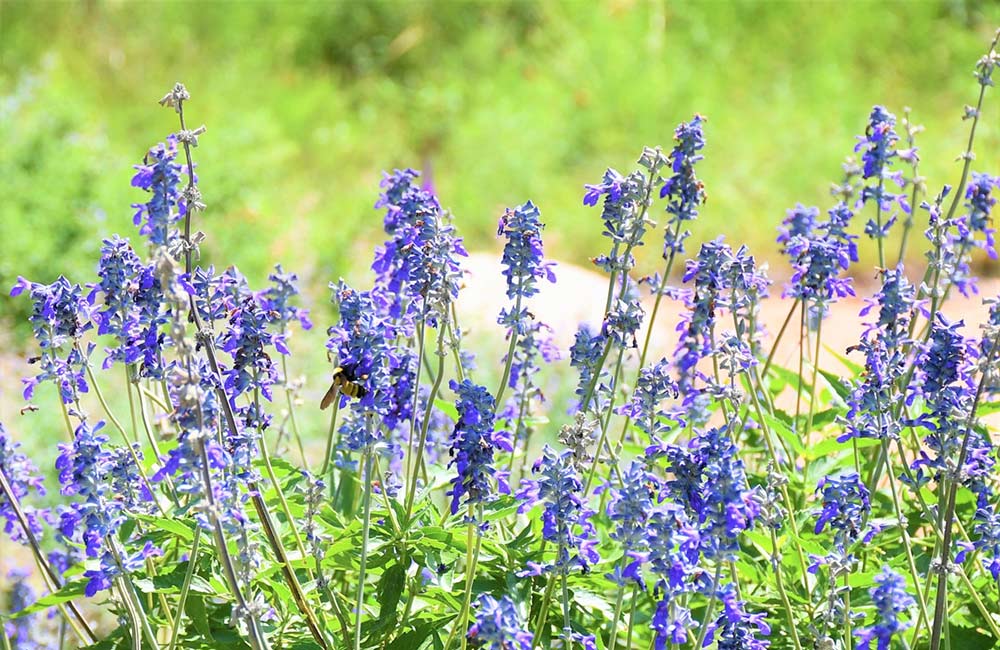 Bees are more attracted to flowers of certain colors. Shades in the blue and purple family can be especially successful in attracting pollinators to your garden. Texas A&M AgriLife photo by Susan Himes