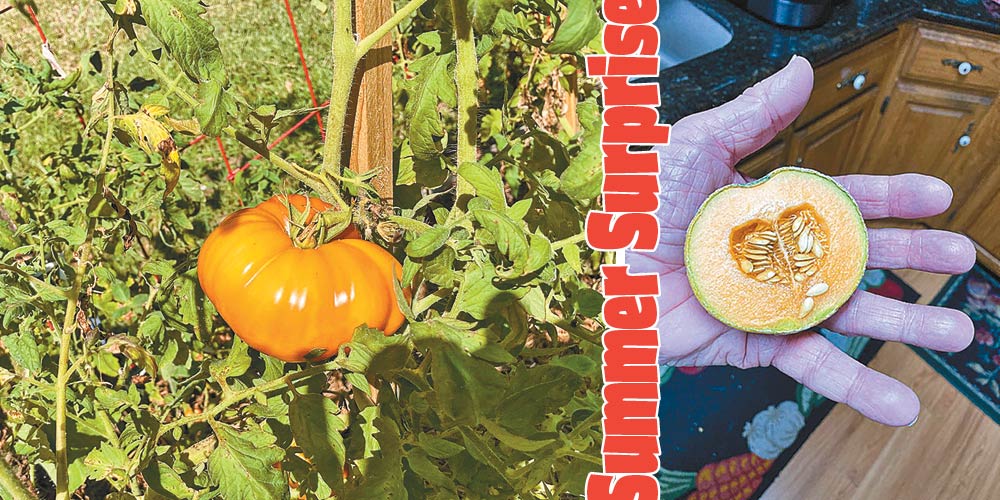 Usually we write about wine, but today our mind is on growing vegetables. The same rules apply—de gustibus.

There is a wonderful song in the old Broadway show, The Fantasticks, with the line “Plant a carrot, get a carrot, not a Brussel sprout, that’s why I like vegetables, you know what you are about.” The song reflects the difficulties of rearing children … with kids, you never know what you will get.

Well, sometimes you get what you expected when you plant vegetables, but sometimes you don’t. I’ve been surprised twice this growing season, once with tomatoes and once with cantaloupe.

One of the harmless competitions among East Texans is seeing who can have the first ripe tomatoes. There is some risk in this, of course … some years you may have early tomatoes, but some years you get frozen out. If I try to be the early bird and plant my tomatoes early they get ripe when we are on our annual summer trip north – they peak before we get back and I end up supplying my friends and neighbors rather than enjoying the fruits of my labors.

This year I decided on a new strategy ... plant late so the tomatoes will not ripen until we get back from the trip. There are of course risks of late planning also; with real summer coming on the weather can be dry and hot and require more regular tomato watering. I have never mastered an automatic watering system, but we are lucky to have a dutiful daughter who willingly will handle the watering until we get back.

My six-pack of three-inch tomato plants seemed more expensive this year, but so what? Gardening, like fishing, is for fun, not for profit—it’s always cheaper to buy than to grow (or catch), but for some of us there is great satisfaction in eating what we grow. When I took my plants out to put in the ground, I noticed that unwittingly I had bought “heirloom” tomatoes rather than a more modern variety like Big Boy. Hmm … there is a certain sense of history in planting something “old-fashioned,” so rather than get new seedlings, I just planted the heirlooms.

My tomatoes ripened as planned, coming into full fruit about the time we got back to Livingston. My strategy seemed to have worked and I was pleased with my ingenuity … until I started picking and eating. Surprise – the ripe heirlooms are not as flavorful, not as juicy, and are laced with more fibrous strands ... or whatever those white cores are called. The heirlooms are not a total loss, but many are smaller than I like and even the larger ones don’t have as much meat as I like in a big, juicy homegrown tomato. Surprise? Yes, but not a disaster. But this close to the end of the season, how could I get some of those big juicy tomatoes that we all love? A fellow tomato-lover (our Editor) suggested a producer and I was lucky to find they still had the ones I wanted ... so I loaded up. Recounting my adventure, it occurred to me that maybe the problem was the gardener, not the heirlooms, but whatever … in the future I am sticking with the newer strains.

My second surprise came with cantaloupes. I had never tried to grow cantaloupes, but I had seen my old friend, Charles, successfully grow them. He added trellises to his garden and grew them vertically. I added a two-foot “cantaloupe” box to the end of my raised garden. I had never seen cantaloupe seedlings, so I got some seeds and planted them in front of my basil (although not a real gardener, I am a well-known expert basil grower). The seeds came up as planned, growing up my trellis; they produced multiple yellow blossoms, and before we left for vacation there was one small (like ½ inch) cantaloupe coming along. When the tomatoes got watered, so did the cantaloupe, so all looked good.

When we returned, the cantaloupe vines were the first things I checked, and I had a major disappointment. Rather than a trellis full, I still had only one cantaloupe, now about green in color and about three inches in diameter. Over the next week, the tomato plants kept producing, but the cantaloupe didn’t change … didn’t get larger or change color.

At the end of the week, I went out one morning and there was my single cantaloupe, lying on the ground. Just my luck, I figured, a squirrel or a raccoon had raided my patch. But the cantaloupe had no marks. I smelled it and it had the warm smell of ripe fruit. So rather than leave this miniature cantaloupe, I took it inside. After a couple of days, I had the nerve to cut it in half, and that was my real surprise. A small, fully ripe cantaloupe, seeds and all. I took out the seeds and spooned out a bite. Wonderful soft texture, nice flavor, thin rind, very easy to eat. So I did, with pleasure and that sense of “I did it.”

How do I account for my surprising garden? Who knows—if you know, let me in on the secret. Maybe I was doing it wrong? Maybe my garden was in the wrong place? As it turns out, growing vegetables is not all that different from buying a bottle of wine. Sometimes it doesn’t turn out exactly as you expected. In any case, it adds to the joy of summer.

By the way, here is a tip for a summer wine. For several years our house wine on vacation has been La Vieille Ferme, available for less than $10 at our vacation spot on Buzzards Bay. It is a dry Rhone wine that comes in white, red and rose but we have only tried the white. I know the rose is available locally. Let me know if you try it. Of course, remember our motto: de gustibus!! And send your comments to This email address is being protected from spambots. You need JavaScript enabled to view it..